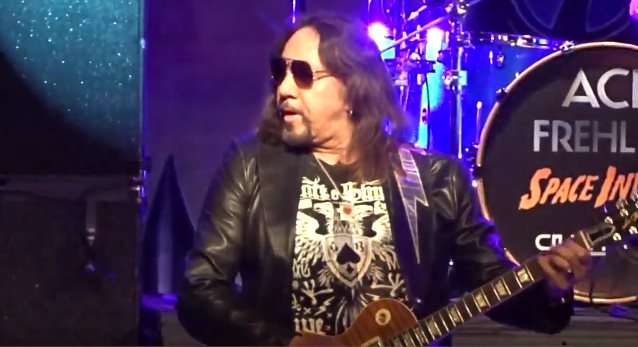 Video: ACE FREHLEY Performs At The Canyon In Agoura Hills

California Rock News has uploaded video footage and photos of original KISS guitarist Ace Frehley's January 29 performance at The Canyon in Agoura Hills, California. Check out the clips below.

Rumors about Frehley's return to KISS gained strength lasty year after he teamed up with KISS lead singer Paul Stanley on a cover of FREE's "Fire And Water", marking their first collaboration since 1998's "Psycho Circus".

Asked if there is a chance that he will re-team with KISS, Frehley told "Talking Metal" at last month's Revolver Music Awards in New York City: "I haven't heard anything from Paul and Gene [Simmons, KISS bassist/vocalist] — although I did get a text from Gene the other day. He wanted to come see me perform this January. So, you know, maybe he'll pop the big question. Who knows? [Laughs]

Ace's latest comments echo those he made in November when he told Eddie Trunk of the "Trunk Nation" radio show: "I haven't been contacted [about a reunion]. I'm not ruling it out. It's a possibility, I guess. But the ball's in Paul and Gene's court. If that's something that they would like to do to end off the career of KISS, I think it could be… if it was handled correctly, it could be great. But those guys pretty much run the show these days. And I'm doing my thing, and they're doing their thing. And if it happens, it'd be great, and if it doesn't, I'll be fine and they'll be fine."