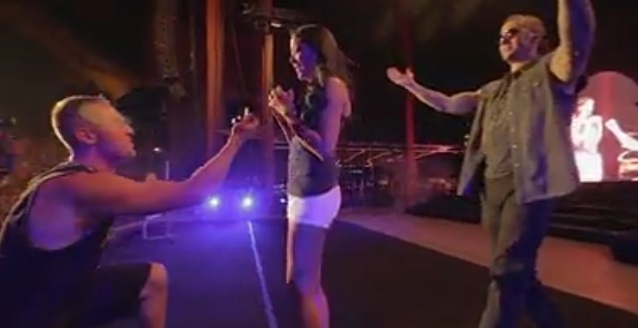 Barkley, who has previously worked in marketing for the Mayhem and Uproar tours, writes on his Facebook page: "After all the hell I have put [Micah] through the last few years, I had to do something big to make up for it. This was a gift from my tour family and myself for all the lonely times I have put her through."

He adds: "I have never met someone that I could be my complete weird self in front of and it honestly baffles me how she puts up with all of my ridiculous shenanigans. If it wasn't for Micah and her daughter Isabelle, I think I would be in a rough situation. She is absolutely drop-dead gorgeous, my best friend and can't wait to see what the future holds for us."

Video footage of the proposal can be seen below.

AVENGED SEVENFOLD and KORN are co-headlining this year's Rockstar Energy Drink Mayhem Festival, which kicked off its annual run on July 5 in Devore, California.

AVENGED SEVENFOLD will reissue its breakthrough second album, "Waking The Fallen", in a new special edition on August 26. "Waking The Fallen: Resurrected" will include a total of 23 tracks, including 11 never-before-heard songs, new artwork, the original first cut of the music video for "Unholy Confessions" and a 30-minute film featuring the present-day band.