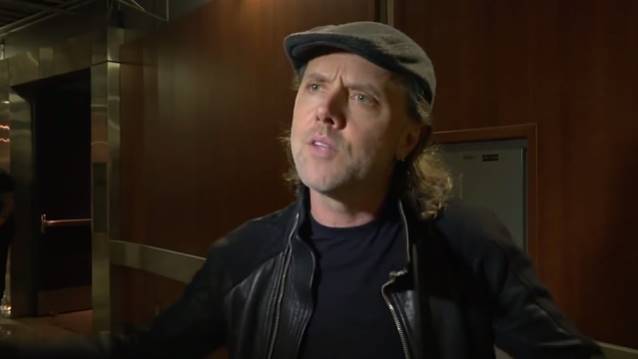 In a recent interview with U.K.'s Mirror, METALLICA drummer Lars Ulrich once again credited the group's healthy diet and lifestyle for its longevity, insisting all his bandmates eat well and try to live balanced lives when they’re not on the road.

Lars, who runs on the treadmill every morning for 30 minutes and claims to "live and breathe hummus," said: "We tend to eat a lot of chicken, turkey, fish and salad — I've some hereditary cholesterol issues, so I don't eat meat from four-legged animals.

"Alcohol is now something that is associated with the end of the day, once all the work is done. If I have anything to drink at home, it's maybe only once every week or two, and it's always after the kids have gone to sleep — I don't like to drink around them."

Ulrich also revealed that quit his cocaine habit ten years ago, thanks, in part, to his good friend Noel Gallagher (OASIS).

"In the early days, I'd always get drunk way faster than the other guys," Lars said. "I realized that if there was a little bit of cocaine involved I could stay up longer, instead of ending up face down in the corner passed out three hours before the party ended. I loved the social elements of cocaine. I loved the danger of it. Then about 10 years ago, I read an interview with Noel Gallagher, in which he said, 'I just stopped doing cocaine.' I thought that was really cool: it felt so fresh, so honest, so pure — I love that side of him. I've never had an addictive personality, so I woke up one day and said: 'enough.'"

In a 2008 interview with Blender magazine, Ulrich said that he missed one thing about doing cocaine. "The bonding," he said. "Two guys in a bathroom stall — it feels like the most important place in the whole world in that moment. I've actually gone into bathroom stalls with friends since I quit, just so I still have a little bit of that bonding."

As to whether he was out of control with the drinking, he said that he never felt the need to go to rehab.

"It was always social drinking," he said. "Honestly, I never drank nearly as much as [METALLICA frontman James] Hetfield. Look at me, I'm 138 pounds. If I had five beers, I'd fall over, and if James had five, he'd go, 'I need 15 more.' I was never one of these wake-up-and-reach-for-the-whiskey-bottle types. I would at least have the decency to eat breakfast first."

Hetfield got clean and sober in 2002, returning to the band to record the controversial "St. Anger" album and make the documentary "Some Kind Of Monster", which chronicled his struggle as well as the group's near-breakup.

Hetfield told The Pulse Of Radio at the time that he was okay with people seeing that side of his life. "Connecting with people has never been easy for me. I think the more that people know about me and my struggles, the easier it will be to connect with people. I've put myself out there, and if they choose to stomp on my heart, or to embrace it, that is up to them."