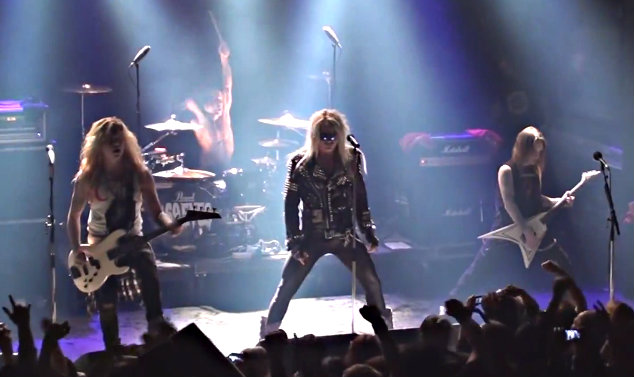 THE LOCAL BAND, the Finnish covers act featuring Alexi Laiho (CHILDREN OF BODOM),Jussi69 (THE 69 EYES),Olli Herman (RECKLESS LOVE) and Archie Kuosmanen (SANTA CRUZ),played a one-off show this past Friday, December 27 at Tavastia in Helsinki, Finland. The group's setlist consisted of 1980s "hair metal" classics, around 30 songs for which have been rehearsed, including tracks originally written and recorded by VAN HALEN, GUNS N' ROSES, POISON and MÖTLEY CRÜE.

"This is a fun break from everything that we normally do," the band's founder, Jussi69, told Ilta-Sanomat.

"We do not have any plans for the future," he added.

"Alexi and the rest of us all have other commitments of our own.

"This is a one-time-only concert. At least for now.

"For us, this is just for fun.

"This is a Christmas present for our fans."

THE LOCAL BAND's setlist was as follows:

CHILDREN OF BODOM will make its triumphant return to North America this February. The band has announced a six-week major market headlining tour that will kick off on February 14 in Quebec City, Quebec, Canada and hit 32 markets across the U.S. and Canada before wrapping with a two-night stand at New York City's Irving Plaza on March 28 and March 29. The tour will feature support from folk metal heroes TÝR and represents CHILDREN OF BODOM's first Stateside headlining run since the release of the band's new LP, "Halo Of Blood".