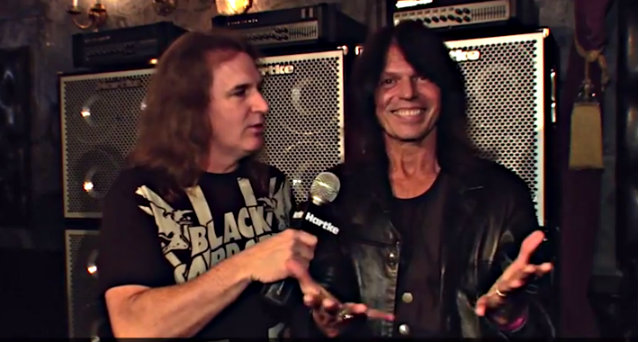 Hartke, one of the leading bass amplification manufacturers in the world, left a mark on Los Angeles' Fonda Theatre on November 9 at Bass Player LIVE! The company brought together some of music's finest players for an all-star tribute to bass legend Geezer Butler. The all-star lineup partnered vocalists Corey Taylor (SLIPKNOT, STONE SOUR),Doug Pinnick (KING'S X) and Sebastian Bach (formerly of SKID ROW) with guitarists Zakk Wylde (BLACK LABEL SOCIETY, OZZY OSBOURNE) and Chris Broderick (MEGADETH) alongside a collection of some of the most notable bass players in music today. Frank Bello (ANTHRAX),David Ellefson (MEGADETH),Rex Brown (KILL DEVIL HILL, PANTERA),Billy Sheehan (THE WINERY DOGS),JD DeServio (BLACK LABEL SOCIETY),Jason Newsted (NEWSTED, formerly of METALLICA) and Rudy Sarzo (QUIET RIOT, OZZY OSBOURNE, DIO, WHITESNAKE) rotated bass duties on a set list that consisted of some of BLACK SABBATH's most notable songs as well as some rarely performed gems. Drummer Charlie Benante (ANTHRAX) was sole timekeeper handling all of the drum parts for every song. The all-stars and attending crowd were even treated to a performance by the legend and Lifetime Achievement Award honoree Geezer Butler, grabbing the bass for SABBATH classics "Fairies Wear Boots" and "N.I.B."