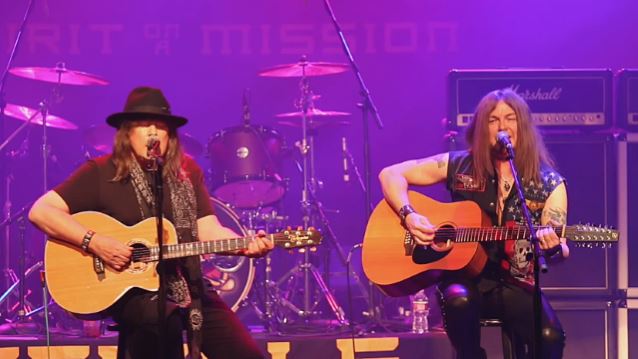 Video footage of Don Dokken and Mark Boals (former singer for YNGWIE J. MALMSTEEN) performingon May 2 at The Canyon club in Agoura Hills, California can be seen below (courtesy of Joe Dolan of JoeDolanPR.com).

Regarding Boals' addition to DOKKEN, Don Dokken told "The Classic Metal Show" last fall: "It's hard to replace Jeff Pilson. Jeff Pilson, he plays with a pick, which I like. I don't like people that play with their fingers. It's not the same. I like Peter Baltes-type bass players who play with a pick, and Sean doesn't. And so it didn't have a lot of 'attack.' And I needed a really killer singer that was as accomplished as Jeff Pilson. And he was sorely missed, you know. So I meet Mark Boals, who's played with Ted Nugent. He did four albums with Yngwie Malmsteen and he's a great lead singer. I didn't really ask him if he wanted to play in DOKKEN because I figured that he's a lead singer and that's what he does. So we had a gig, and he was doing those acoustic shows with me. And he says, 'I play bass.' So I said, 'Let's play a show together and see how it goes.' So we rehearse with Mark on vocals and Mick [Brown, drums] and me, and it sounded amazing. And, as you see on the Internet, people go, 'I saw DOKKEN and the harmonies were awesome.' So I said, ' You wanna be the bass player?' He said, 'Yep,' And I said, 'OK, you're in.' So that's it."

DOKKEN's eleventh studio album, "Broken Bones", sold around 2,600 copies in the United States in its first week of release to land at position No. 173 on The Billboard 200 chart. Released in North America on September 25, 2012 via Frontiers Records, the effort was made available in two configurations: standard CD and limited-edition CD in digipak with a bonus DVD, which features a comprehensive "Making Of The Album" documentary.