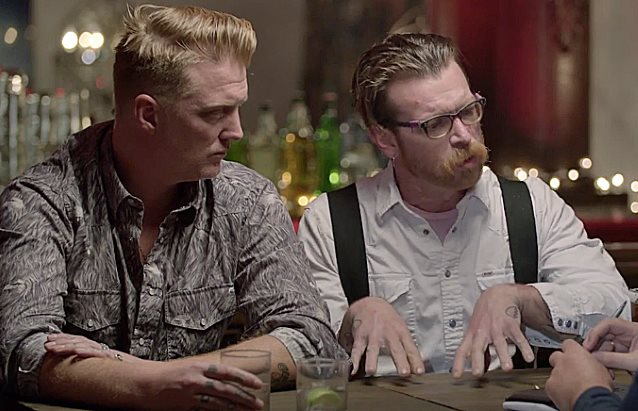 EAGLES OF DEATH METAL — who were thrust into the headlines on November 13 when a mass shooting at the band's Paris concert left nearly 100 people dead — sat down for an on-camera interview with VICE to speak about the tragedy.

In the clip previewing the chat with VICE founder Shane Smith, EAGLES OF DEATH METAL lead singer Jesse Hughes describes the events that took place at the concert venue Bataclan.

"Several people hid in our dressing room, and the killers were able to get in and killed every one of them — except for a kid who was hiding under my leather jacket," he says. "People were playing dead, and they were so scared."

"A great reason why so many were killed is because so many people wouldn't leave their friends," he continues. "So many people put themselves in front of people."

The full video of the VICE interview with EAGLES OF DEATH METAL will premiere next week on VICE.com.

EAGLES OF DEATH METAL on Thursday announced that all of their future shows are on hold and issued their first official statement following the events of November 13, when more than 129 people were killed in seven coordinated terrorist attacks.

The greatest number of deaths took place at the Bataclan, where EAGLES OF DEATH METAL were performing when terrorists began a siege that ended with 89 people in the club either shot to death or killed in explosions.

EAGLES OF DEATH METAL was founded in 1998 by QUEENS OF THE STONE AGE mainman Josh Homme and his longtime friend Jesse Hughes. Homme appears on all the band's albums but only plays live with them occasionally. He was not in Paris at the time of the attacks.