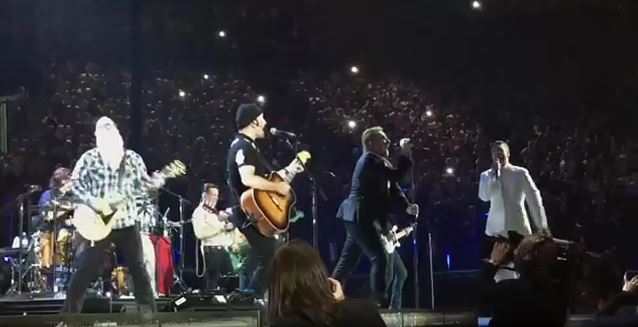 Video: EAGLES OF DEATH METAL Join U2 On Stage In Paris

California rockers EAGLES OF DEATH METAL joined U2 on stage during the last song of the Irish rock band's December 7 concert at the AccorHotels Arena in Paris, France. The two bands played a cover version of Patti Smith's classic "Power To The People". The Jesse Hughes-fronted group also played its own tunes after U2 left the stage.

"They were robbed of their stage three weeks ago and we would like to offer them ours tonight," U2 singer Bono told the audience during the encore of their HBO special.

"We are all Parisians tonight," Bono said earlier in the concert. "If you believe in liberty, Paris is your hometown."

EAGLES OF DEATH METAL was originally rumored to be special guests of U2 on the first night of Irish band's two-night Paris stand.

EAGLES OF DEATH METAL, who were about six songs into their set before gunfire broke out at the Bataclan venue in Paris, France on November 13, are planning to resume their halted European tour in February 2016.

They recently vowed to be the first band to return to Bataclan when it reopens. Hughes stated in an interview: "I cannot wait to get back to Paris… Our friends went there to see rock 'n' roll and died. I'm going to go back there and live."

More than 129 people were killed in seven coordinated terrorist attacks in the French capital on November 13.

The greatest number of deaths took place at the Bataclan, where terrorists began a siege that ended with 89 people in the club either shot to death or killed in explosions.

EAGLES OF DEATH METAL was founded in 1998 by QUEENS OF THE STONE AGE mainman Josh Homme and his longtime friend Jesse Hughes. Homme appears on all the band's albums but only plays live with them occasionally.