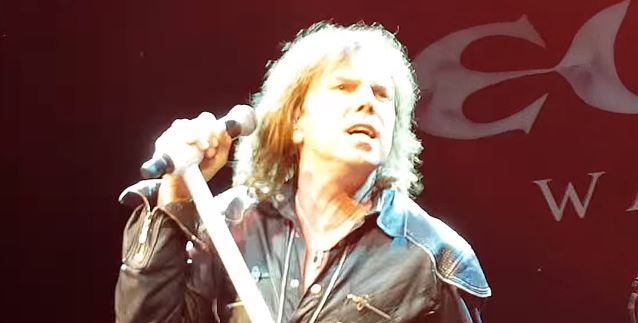 Swedish hard rockers EUROPE paid tribute to EAGLES guitarist Glenn Frey by performing a cover version of the EAGLES classic "Desperado" on January 25 at the Wild Horse Pass Hotel & Casino in Chandler, Arizona. Fan-filmed video footage of the performance can be seen below.

The surviving members of EAGLES posted a statement on their Facebook page citing "complications from rheumatoid arthritis, acute ulcerative colitis and pneumonia" as the causes of Frey's death.

"Words can neither describe our sorrow, nor our love and respect for all that he has given to us, his family, the music community & millions of fans worldwide," said the statement.

EAGLES were forced to pull out of attending the Kennedy Center Honors ceremony last November because Frey required major surgery.

Frey's longtime EAGLES collaborator Don Henley said in a separate statement: "We were family, and like most families, there was some dysfunction. But, the bond we forged 45 years ago was never broken, even during the 14 years that the EAGLES were dissolved. Glenn was the one who started it all. He was the spark plug, the man with the plan. He had an encyclopedic knowledge of popular music and a work ethic that wouldn't quit. He was funny, bullheaded, mercurial, generous, deeply talented and driven."

EAGLES' first best-of collection, "Their Greatest Hits 1971-1975", is among the best-selling albums of all time, having sold more than 26 million copies. It was the first album to be certified platinum (one million sold) by the Recording Industry Association Of America, which introduced that classification in 1976.