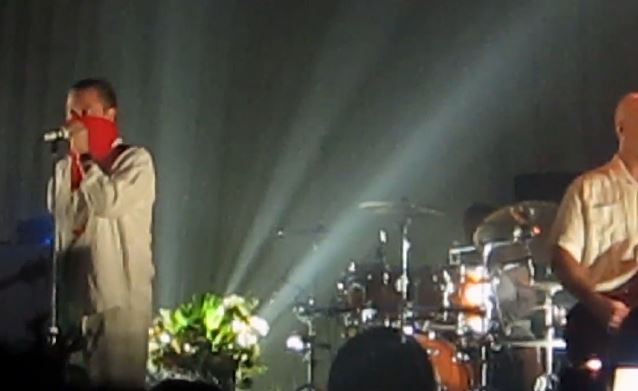 Fan-filmed video footage of FAITH NO MORE performing a new song titled "Cone Of Shame" for the first time during the band's February 18 concert in Tokyo, Japan can be seen below.

FAITH NO MORE keyboardist Roddy Bottum explained in a new interview why the band decided to make its first new album since 1997, the upcoming "Sol Invictus", despite being adamant for years that it would never happen. Bottum explained, "We got really bored with what we were doing, and we also felt like there are a whole lot of people out there who look to us to be inspired and encouraged by what we do artistically. So to be doing old songs on a big stage with a lot of people watching over and over — it felt kind of cheap and easy and a little too safe of a place to be. That's not who we are."

FAITH NO MORE reunited for touring purposes in 2009, 12 years after the release of its final studio set until now, "Album Of The Year".

The band announced last year that it was recording new material, with "Sol Invictus" set for release on May 19.

Bottum said about the new CD, "It really does go back to out roots, and (it's) really gothic — it's really sort of in the dark and there's a lot of somber tones on it."

Bottum also praised singer Mike Patton's lyrics, saying, "He has done a super, super, great job. I'm a huge fan of his lyrics. I love what he does lyrically. There are some really fun wordplay (things) that he does, and there is a lot of referencing of us as a core group."

A single called "Superhero" will be available on seven-inch vinyl on March 17, followed by a digital release on March 31.

FAITH NO MORE has also confirmed its first North American shows since 2010 with a spring outing kicking off April 15 in Vancouver.

tonight was the first performance of CONE OF SHAME. it felt good to do that in Tokyo to rectify the wreckage of last night's tumult. HUG.