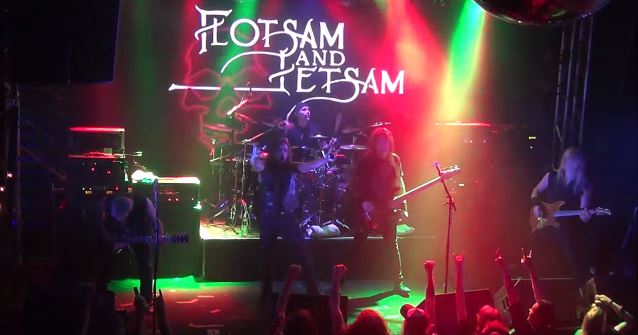 Fan-filmed video footage of FLOTSAM AND JETSAM's July 28 performance at Sticky Fingers in Gothenburg, Sweden can be seen below.

FLOTSAM AND JETSAM singer Eric "A.K." Knutson told From Hero To Zero last month about the band's forthcoming follow-up to 2012's "Ugly Noise": "We're working on a new record now, and most of it's been done… actually, some at Mike's [Gilbert, guitar] house, some at Steve's [Conley, guitar] house, some at my house… So it's actually coming along very nicely… We go home [to Arizona] in a couple of weeks [following the completion of the European tour], and I finish the vocals for the new record, which we don't have a title for yet. The new record has songs that sound like they came from the '80s, some songs that sound like they came from the middle of our career, and some songs that sound like they're brand new, and they're all on one record together. So it's kind of difficult to come up with a concept or a name for it. So we're not quite sure what we're gonna do there yet. But the music is basically done; I just need to go home [and] finish vocals, and then we come back to Europe for another four or five weeks, and hopefully have the album out before the end of the year."

FLOTSAM AND JETSAM last year parted ways with guitarist Edward Carlson and bassist Jason Ward and replaced them with Steve Conley and Michael Spencer, respectively. The band also recruited SHADOWS FALL drummer Jason Bittner after Kelly Smith left the group in November 2014 to focus on caring for his family.

Spencer stated about the new FLOTSAM AND JETSAM material: "There's a great, old-school thrash vibe going on with the direction of the songs and what originally influenced the band, mixed with a little of what we like about today's sound, in metal."