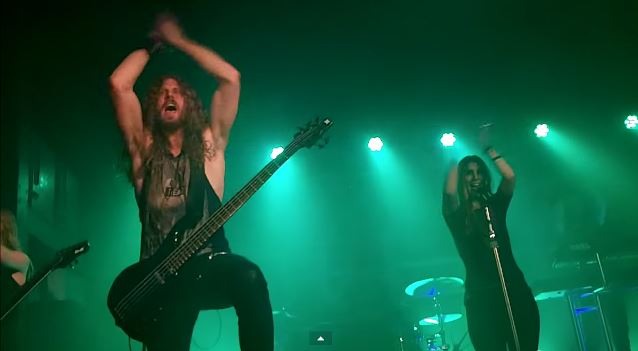 Bassist Otto Schimmelpenninck of Dutch symphonic metallers DELAIN is recovering after undergoing surgery for a ruptured testicle, suffered during the band's November 26 performance in Birmingham, England.

Schimmelpenninck writes on Facebook: "After what can be described as one of the most unpleasant adventures I've ever had to endure, we're back home again from the UK.

"As a lot of people are asking about my injuries and lots of friends know what happened already, I figured it would be best to share with you all before all kinds of versions of this story start to circulate. Spoiler alert: you might want to read this another time if you were planning on having sex within the hour or so.

"As some of you know, we use 'streamer canons,' which shoot silver streamers into the audience, usually during 'The Gathering'. We've been using this for ages without any problems at all, but in Birmingham things went wrong.

"Since we were with six on stage instead of five, there wasn't really a standard position on stage. Normally, Charlotte [Wessels, vocals] would be stage center, Timo [Somers, guitar] at the singing mic, I at the other side. Having Merel [Bechtold, guitar] on stage with us meant everyone just had to pay attention at the moment the streamers would shoot. In my enthusiasm, I did not pay attention, and happened to be VERY close when the streamer fired. It hit me from the back, in my genitals. Although pain was pretty bad right away, I was merely pissed off at myself for not paying attention. During the next song ['Here Come The Vultures'], pain got worse, though, and I had the feeling I was bleeding. Pretty soon pain got to the point where I could barely stay conscious anymore, but for some reason I did manage to finish the show and even squeeze out some grunts!

"After the show, the damage was more obvious: my scrotum was the size of a big grapefruit and I was in a lot (yeah, really a lot) of pain. I was taken to the nearest hospital where after hours and hours of waiting, I was finally operated around 8:30 in the morning. It appeared here my left testicle had been ruptured as well as some arteries. More than 500 ml of blood was removed from my scrotum and my testicle stitched up. I stayed in hospital for the rest of day and night, and was discharged on Friday afternoon. From there I took the plane to Glasgow where I was reunited with my girlfriend and the DELAIN family. Fortunately we had had a very comfortable nightliner and top-notch driver, so I could travel quite comfortably and get some rest until we got home.

"I was very close to losing my left testicle, but chances are good it will be fine. It will take about six weeks until I can find out though, when I have an ultrasound scan. It will also be a while before I am without the very uncomfortable pain I am in now, but sadly, it's just the way it is for now. I should be okay well in time for the European tour with SABATON though.

"Again, thank so much for all your get well wishes, support and kind messages; it means a lot to me!”

Fan-filmed video footage of the incident can be seen below (skip to around 3:30 mark).

DELAIN's new album, "The Human Contradiction", sold around 1,900 copies in the United States in its first week of release. The CD landed at position No. 8 on the Top New Artist Albums (Heatseekers) chart, which lists the best-selling albums by new and developing artists, defined as those who have never appeared in the Top 100 of The Billboard 200. The effort once again features a guest appearance by Marco Hietala of NIGHTWISH and TAROT; George Oosthoek (ex-ORPHANAGE); and ARCH ENEMY/ex-THE AGONIST vocalist Alissa White-Gluz.