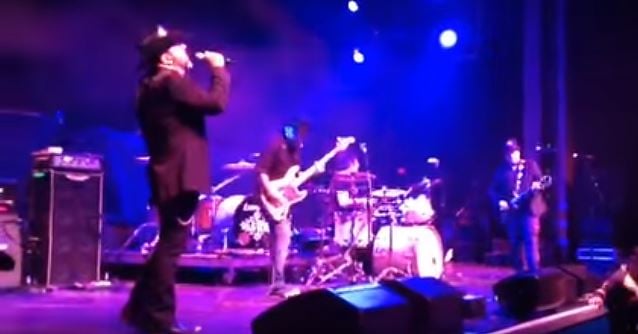 Former MORBID ANGEL vocalist and bassist David Vincent joined Danny B. Harvey (HEADCAT, THE 69 CATS) on stage this past Friday, January 22 at the NAMMJAM 2016 at the City National Grove Of Anaheim in Anaheim, California to perform a cover version of "Big River" by Johnny Cash. You can now watch video footage of his appearance below.

Vincentpreviously teamed up with Harvey on January 9 at the White Horse Saloon in Austin, Texas to sing a country song David wrote, "Buyer Beware".

Vincent issued a statement last June confirming that he was no longer working with MORBID ANGEL guitarist Trey Azagthoth. He said: "Trey and I have accomplished amazing things together over the past 30 years and I wish him the best with his future projects. Out of respect for the legacy of these accomplishments, I encourage MORBID ANGEL fans to not take sides, because I am not." He added: "I look forward to sharing my new endeavors with all of you in the near future. Until then, stay Morbid!"

Azagthoth announced on June 15, 2015 that MORBID ANGEL had reunited with Steve Tucker and that they were working on material for the band's next record. Later that same day, Vincent, who rejoined MORBID ANGEL in 2004 after first parting ways with the band in 1996, issued a statement of his own claiming that he had not left the group and had not been asked to do so. Also on June 15, drummer Tim Yeung confirmed his exit from MORBID ANGEL, explaining in a statement: "There have been some lineup changes with MORBID ANGEL. Unfortunately, due to financial differences, I will not be continuing with [the band]… I wish Trey and MORBID ANGEL all the best. As for myself, I'm always up for the next opportunity life throws my way."

On June 18, 2015, Norwegian guitarist Destructhor (a.k.a. Thor Anders Myhren) announced that he had officially left MORBID ANGEL "due to issues of them wanting to work with someone more local." He added that this was "actually pretty good news to me, since I personally decided to leave MORBID ANGEL after the last tour we did in Europe in November/December 2014. It is definitely time for me to move on with the Norwegian extreme act MYRKSKOG. This is where I truly belong and exciting things are happening!"