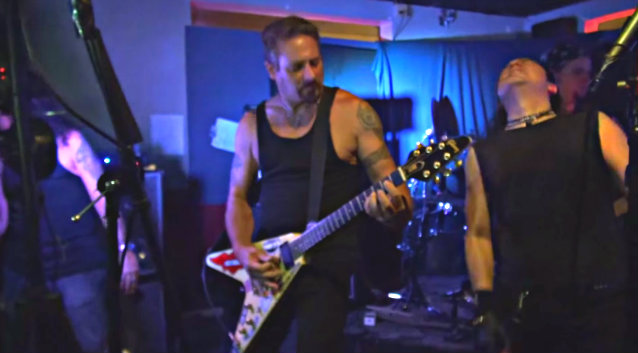 Former OVERKILL guitarist Bobby Gustafson joined Florida metal tribute act MADE OF METAL on stage on August 16 at Archie's West in Tamarac, Florida to perform two classic OVERKILL songs: "Hello From The Gutter" and "Elimination". Fan-filmed video footage of his appearance can be seen below.

Growing tension within OVERKILL forced Gustafson, who played on the band's first four albums (including 1988's "Under The Influence" and 1989's "The Years Of Decay"), to leave the group in 1990. He told Noisecreep in a 2011 interview about his declsion to depart: "D.D. [Verni, OVERKILL bassist] wanted to do a show at [legendary rock club] L'Amour in Brooklyn just to have Christmas money. I was against it. He quit the band on me and [Bobby] Blitz [Ellsworth, vocalist], but then he wanted to come back. So we let him back in, and then I find out that for two weeks he's trying to get me kicked out of the group through our management. He said that he wanted two guitar players. This was after we had already done four albums with one. Not to mention that our latest and best-selling album had been written all by me."

He continued: "I still believe it was money motivated, as we were all going to receive some big royalty checks from our merchandise company. That's all D.D. wanted. He could have cared less how long the band lasted after that. The thing that hurts the most is that I let myself be taken advantage of by a bass player — a fucking bass player!"

Regarding the fact that he was replaced with two guitarists, Gustafson said: "Some might say it was like a compliment, yes. I would tend to agree. Plus every album after me, when they had two guitar players in the lineup, never topped what i did. 'The Years Of Decay' is still our best-selling album and I had a really short time to write it. I did it short breaks within a six-month period. D.D. had years to put together their next album [1991's 'Horrorscope']. So his opinion that two guitarists would make them heavier failed."

Asked if he would be open to playing some reunion shows with the classic lineup of OVERKILL, Gustafson said: "I'm sure a lot of people would love that! Blitz and I talked about it. If we had done the 25th anniversary [of the 'Feel The Fire' album], it might have happened.

"We don't really like our old drummer, Rat [Skates], these days. I'd rather play with Sid [Falck, drummer 1987-1992] anyway. But I think if I was back in the band, it would look like they failed in some way or that they made a mistake. So I don't know if it will ever happen. If D.D. ever found the balls to apologize to me for stabbing me in the back, it could happen."