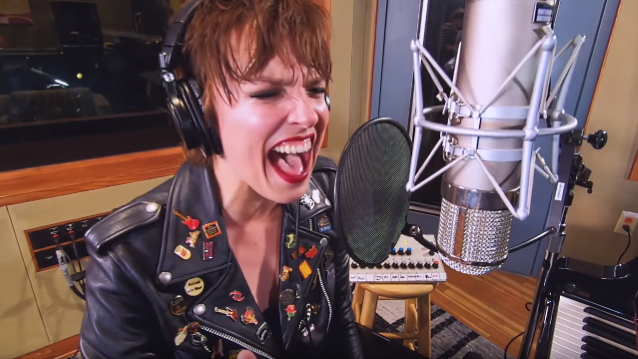 Video footage of HALESTORM performing an acoustic version of the song "The Silence" can be seen below. The track is taken from the band's fourth full-length studio album, "Vicious", which came out last year.

HALESTORM guitarist Joe Hottinger told Classic Rock about "The Silence": "We were going to do an 11-song record and end it with 'Vicious', but it felt incomplete. So we decided to end with 'The Silence', and I'm so glad we did. We'd had the music and the melody bouncing around for about five years, and we always knew it needed a special lyric.

"Every time we tried it, it wasn't right, but in the middle of this writing process, I made a new demo of it, and Lzzy [Hale, HALESTORM singer] put a vocal down. The vocal you hear is actually from the demo, from the night she wrote it, and she killed it.

"She's such a sweetheart as a human, with such a pure love. To be able to write something using her own personal memories mixed in with this big idea of love outlasting the pyramids, it's beautiful. I'm really glad it made the record."

Hottinger revealed in recent interview with Guitar Bonedo that HALESTORM has finished recording a new EP, although he did not want to divulge details about the disc.

Hottinger explained: "There'll be more information on that coming up. It's just getting mixed now, and it sounds awesome. It's something we've never really done before. Everyone's expecting a cover EP, but... we're about to shake it up a little. Technically, it is a cover EP. [Laughs] You'll find out. It's cool."

Lzzy added: "It's nothing like what you think. We can't really talk about it."

The new EP will be the band's first since the band's third covers EP, "ReAniMate 3.0: The CoVeRs eP", which came out in January 2017.

HALESTORM has announced a string of U.S. live performances in the spring of 2020. The dates kick off on April 17 at a radio festival in Tampa, Florida.