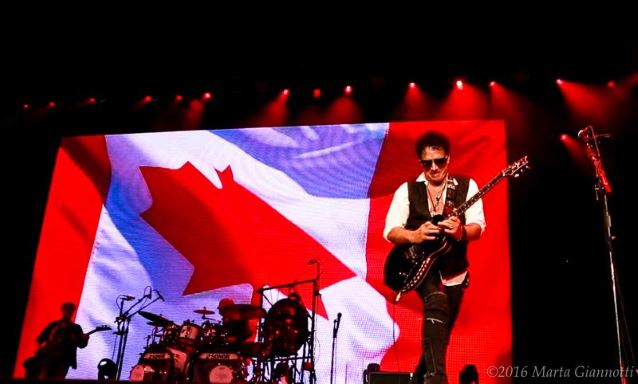 Q107 has uploaded footage of JOURNEY guitarist Neal Schon performing a guitar version of Canada's national anthem, "O Canada", live during the band's July 7 concert at the Molson Canadian Amphitheatre in Toronto, Ontario, Canada. Check out the clip below.

Asked by JamBands.com last month if there are any plans for JOURNEY to record new music, Schon said: "Yeah, I've been writing. Jonathan [Cain, keyboards] has been working on his solo thing, but I think he's just about done with that. I think that we're going to come up with some new material.

"I'm so happy that Steve [Smith, drums] has come back into the fold with us," he continued. "He resurrects a lot — so many of the years that went by with JOURNEY. Past, present, and future looks really good with him, and he's having a really good time. A bonafide great time. I think he's loving it a lot more than he thought he would. He was doing his jazz thing for so long, and now he's really venturing out, doing a few other records here or there, whether they're my records or his own records.

"It's been a long time since he's done anything like JOURNEY. He's the ultimate professional. He directs everything. He couldn't remember a lot of it, because it's been so many years and decades that have gone by, but he dove back in and relearned everything as he originally played it. Now he's taking it to a new plateau."

JOURNEY's most recent studio album, "Eclipse", was released in May 2011. The Walmart exclusive debuted on The Billboard 200 album chart at No. 13 — eight spots lower than the band's previous album, 2008's "Revelation" — which also went on to hit No. 1 on Billboard's Top Independent Albums chart.