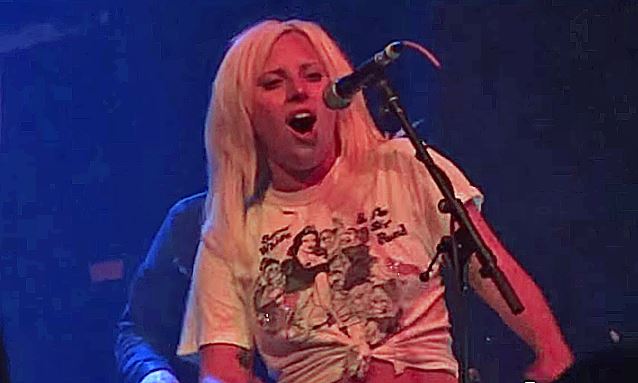 Pop superstar Lady Gaga joined the New York-based band THE DIRTY PEARLS on stage this past Saturday, June 20 at the Gramercy Theatre in New York City and traded the mic back and forth with THE DIRTY PEARLS vocalist Tommy London on several tracks, including VAN HALEN's "Panama". Fan-filmed video footage of her appearance can be seen below.

Lady Gaga namechecked THE DIRTY PEARLS on her song "Heavy Metal Lover": "Dirty Pearls and a patch for all the Rivington Rebels/ Let's raise hell in the streets drink beer and get into trouble." In addition, THE DIRTY PEARLS played all official after-parties for Lady Gaga's 2013 tour.

Lady Gaga previously spoke about her love for IRON MAIDEN and BLACK SABBATH, calling the experience of seeing MAIDEN for the first time a "life-changing" event. The singer also appeared in photos with ANTHRAX drummer Charlie Benante and Rock And Roll Hall Of Fame inductee Alice Cooper.