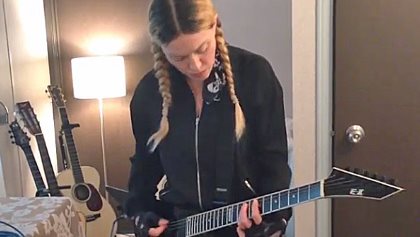 "Rebel Heart" is the title of Madonna's new album. A tour in support of the CD is scheduled to kick off in September.

Madonna previously paid tribute to "Dimebag" Darrell Abbott by playing the main riff to PANTERA's classic song "A New Level" during her May 10, 2008 performance at Radio One's Big Weekend at Mote Park in Maidstone, U.K.

MADONNA's longtime touring guitarist and guitar teacher is none other than Monte Pittman, who has also recorded and toured with PRONG.

According to Bug magazine, Pittman landed the job as MADONNA's touring guitarist after a man called the music store in Los Angeles where Pittman was working inquiring about guitar lessons, and Monte's name was passed along. That customer was none other than Guy Ritchie, film director extraordinaire and soon-to-be husband of Madonna. "Guy was my third student," Monte told Bug. "That was before 'Snatch' came out, and I didn't know who he was. It turns out he and Madonna were dating. He had just had some surgery done on his knee, I believe, so he was off his feet and she got him a guitar. He started taking lessons, and he got pretty good at it. I remember the day 'Music' [Madonna's CD] came out, and I taught him a few things from it. I thought it would be cool for him to play them for her."

When Guy returned the favor and bought Madonna a guitar, she started taking lessons from Monte as well. "It was the same thing as Guy — she learned everything I gave her," Monte told Bug. "She took it seriously, and worked really hard at it. She learned so much so quickly. That's one thing about Madonna — her drive is incredible."

A month after Madonna started playing guitar, she got called to perform on "The Late Show with David Letterman". She invited me to come play with her, and I thought she was pulling my leg at first," Monte told Bug, "but she was serious."