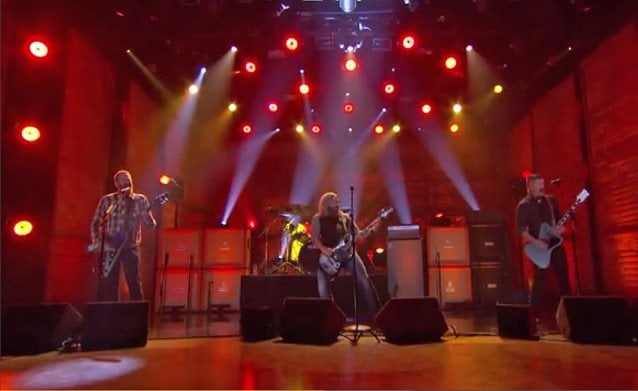 "Show Yourself" is taken from MASTODON's seventh studio album, "Emperor Of Sand", which debuted at No. 7 on the Billboard 200 album chart, making it their third Top 10 album. The follow-up to 2014's "Once More 'Round The Sun" was recorded at The Quarry Recording Studio in Kennesaw, just outside MASTODON's hometown of Atlanta, with producer Brendan O'Brien (PEARL JAM, NEIL YOUNG, AC/DC, RAGE AGAINST THE MACHINE),who first worked with MASTODON on their seminal 2009 album "Crack The Skye"

MASTODON bassist/vocalist Troy Sanders and guitarist Bill Kelliher explained in an interview with Noisey that the band doesn't let online trolls and haters — and even some of their own fans — get to them with criticism about their sound or the way it's changed. Kelliher said, "Our fucking fans are nuts. They pick apart every fucking note, every fucking word, who's singing what, why this song doesn't sound like the last song, why this song sucks because it's different."

Kelliher added: "I read these comments on the internet of people saying we sold out by playing songs like 'Show Yourself'. Who the fuck are you? What do you mean we sold out? I'll play whatever music I want to play! I'll put out a goddamn pop record if I want to. I don't have to answer to anybody but my bandmates — and my wife."

Kelliher offered his perception of who some of these alleged fans are, saying: "There's people that follow the MASTODON Facebook page and then they talk shit. Are you just trying to be cool? I think of a pimply-faced 14-year-old in his underpants sitting on his computer. Where's your band that you've had for 17 years? Where are your three-time Grammy loser certificates?"

MASTODON has been nominated for a Grammy three times in the "Best Metal Performance" category over the years, losing all three times.