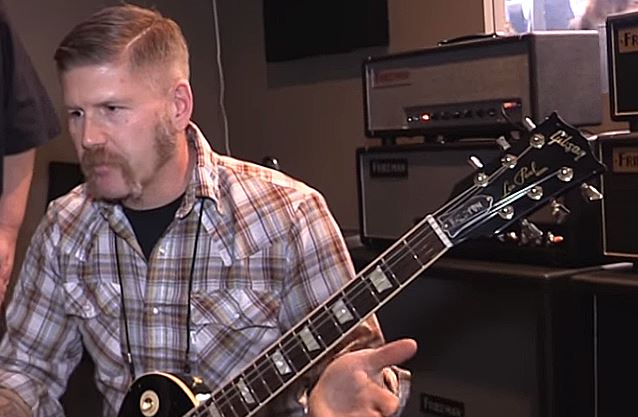 Premier Guitar has uploaded video footage of Bill Kelliher (MASTODON) talking about and demonstrating his new signature Butterslax 100-watt head and cabinet from Friedman at this year's NAMM show in Anaheim, California. This three-channel amp is handwired in the USA, and the cabinet consists of 2×15 on the bottom and 2×12 up top.

Kelliher recently revealed to Democrat & Chronicle that he used to drink so hard he had to be hospitalized because his liver was shutting down. "It's been a struggle for many years," he said. "Everyone tells me the first year is the most difficult, when you've been an alcoholic most of your life."

He continued: "Being sober, I could hold it together when I saw my mom [after she developed a brain tumor, which revealed itself when she had a seizure], in a kind of vegetative state. My brother was losing it and I just told myself, 'I've gotta stay strong.' We're only here for so long. For me it was a choice when I gave up the booze. I didn't have to be that guy who needs a depressant to cope with life."

MASTODON's latest album, "Once More 'Round The Sun", sold around 34,000 copies in the United States in its first week of release to land at position No. 6 on The Billboard 200 chart. The record arrived in stores on June 24, 2014 via Reprise Records.