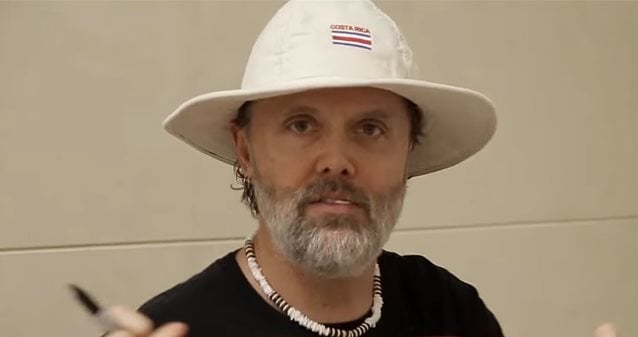 X17online.com has uploaded a short video clip of METALLICA drummer Lars Ulrich and his wife, model Jessica Miller, exiting Los Angeles International Airport on Friday, February 10 as they arrived for this weekend's Grammy Awards. Check out the footage below.

Ulrich, 53, and Miller, 32, got engaged in July 2013 and married two years later. This is the third marriage for Lars, who was previously married to Debbie Jones and Skylar Satenstein.

Ulrich has two sons, Myles and Layne, with Satenstein, and a third boy, Bryce, with Danish actress Connie Nielsen.

METALLICA just played three shows in Copenhagen, Denmark and is scheduled to perform with pop superstar Lady Gaga at the 59th annual Grammy Awards on Sunday (February 12) in Los Angeles.

It's not yet known which song METALLICA will play at the event, which will air live from the Staples Center in Los Angeles at 8:00 p.m. ET on CBS.

The band had previously promised "something unique and special" for its Grammys performance. The group is up for the Grammy Award for "Best Rock Song" for the track "Hardwired" from its new album, "Hardwired... To Self-Destruct".

Following the Grammy Awards on Sunday, METALLICA will play an intimate show for around 3,000 or so fans at the Hollywood Palladium.