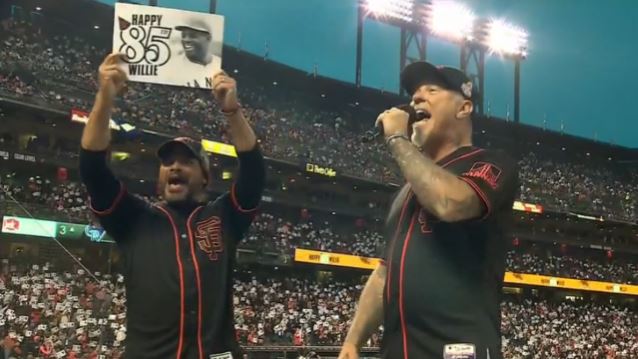 As was the case at the first three installments of the "Metallica Night", METALLICA drummer Lars Ulrich threw out the first pitch, while Hetfield and METALLICA guitarist Kirk Hammett performed a version of America's national anthem, "The Star-Spangled Banner".

Hammett spoke to MLB.com about what it means to him to have this relationship with the San Francisco Giants, being a San Francisco native. He said: "It's amazing, you know. As a hometown kid, being able to hang out with my hometown kid, I mean, it's epic, you know. It brings me back to when I was a little kid and I used to go see the Giants at Kezar Stadium in Candlestick Park and whatnot. Willie Mays is here. I used to idolize Willie Mays when I was in fourth and fifth grade like all my other friends did. It's just a really, really cool thing. I totally enjoy it. I mean, it's wonderful. My family loves it too, and it's just a great, great thing. And James and I, our rendition of the national anthem, I really feel, is really unique and different, and it's great that we can come here and play our version for our home team and our hometown audience, and it's really, really great."

Prior to the 2014 festivities, Hetfield spoke to Bay Area radio station Live 105 and explained how this melding of rock and baseball came about.

"What's special about this is you can actually merge the two worlds together," METALLICA bassist Robert Trujillo told the Associated Press at the first "Metallica Night". "I feel that music is such an inspirational form of energy, as baseball is. And especially with METALLICA, believe it or not, our shows are very physical. Sports is a very physical thing, too."