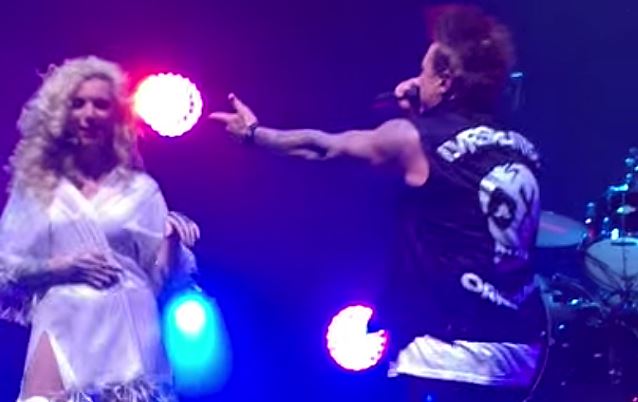 Video: PAPA ROACH Joined By IN THIS MOMENT's MARIA BRINK For 'Gravity' Performance

IN THIS MOMENT singer Maria Brink joined PAPA ROACH on stage last night (Tuesday, May 19) in Moline, Illinois to perform the PAPA ROACH song "Gravity". Fan-filmed video footage of her appearance can be seen below.

PAPA ROACH frontman Jacoby Shaddix recently told Songfacts about the song: "On 'Gravity', I really put it all out there: my failures as a husband, as a lover, and as the head of my household. I talk about my brokenness, and me and my wife's relationship in some real, true story factual-type stuff. I think it's a bit of a testimony for me and my wife, like, 'Hey man, if you're another couple that's going through this struggle, you can make it through if you really want to, if you really love each other.'"

"Gravity" is taken from PAPA ROACH's latest album, "F.E.A.R.", which came out at the end of January. The new disc was recorded in Las Vegas, taking the band out of their Sacramento, California home base for the first time since 2006. PAPA ROACH worked with the father-and-son producing team of Kevin and Kane Churko on the new CD.

Shaddix told The Pulse Of Radio that he wasn't very happy at first about going to Sin City to record. "I ended up in this city where I've had some of my greatest failures and worst decision making, and some of my biggest debacles of my life happened in Vegas, you know," he said. "And I believe I was sent back to that city to go do right this time, and we went there and I just faced that fear of living in this city that I felt was gonna eat me alive. But really and truly I just gave myself to this music 100 percent, and that's what pulled me through."

Shaddix admitted that the band went into the studio this time with almost no new material prepared, explaining, "Usually when we begin working, we'll have a bunch of demos, and I'll have a bag of lyrics ready to go. We didn't have those things this time."

Guitarist Jerry Horton added, "We walked into the studio with nothing. It was frightening since it was so different, but it was also liberating. Once the ball started rolling, it was a snowball effect."