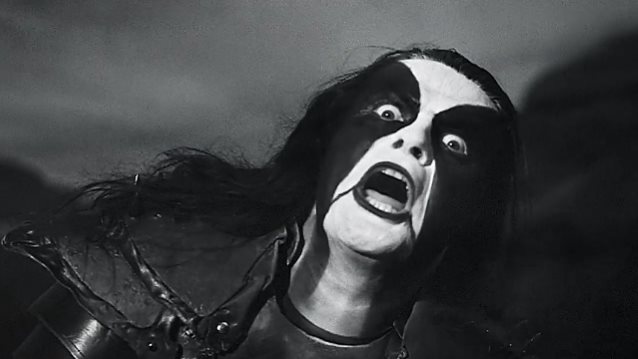 "Winterbane", the new music video from ABBATH, the band led by ex-IMMORTAL frontman Olve Eikemo (a.k.a. Abbath),can be seen below. The clip was created by Jon Simvonis and was filmed by Ragnvald Stokken and Francisco Munoz.

"Winterbane" is taken from ABBATH's self-titled debut album, which was released on January 22 via Season Of Mist.

King Ov Hell comments on the "Winterbane" clip: "After some months of hard work, we are finally ready to present you the greatest metal video of all time, 'Winterbane'. Next project would be to build a wall between Sweden and Norway, and have the Swedes pay for it. We are making metal great again!"

ABBATH released a seven-inch single, "Count The Dead", on December 11, 2015 via Season Of Mist. The A-side features the title track while the B-side consists of a cover version of the JUDAS PRIEST classic "Riding On The Wind".

In a recent interview with Australia's TheMusic.com.au, Abbath spoke about the circumstances surrounding his departure from IMMORTAL and his decision to launch a new group. "I feel like I've been fired," he said. "It was never my intention to go solo but I really feel like I've been forced into it. Apparently they [lyricist/guitarist Demonaz and drummer Horgh] are going to continue on [as IMMORTAL] without me and that's fine — but it was very disappointing that no one, not even [IMMORTAL's record label] Nuclear Blast, wanted to hear my side of the story. The other guys wanted to do things solely on their timetable and also claimed that I need to go to rehab, which was just nonsense, because I've always delivered, live and in the studio — always."