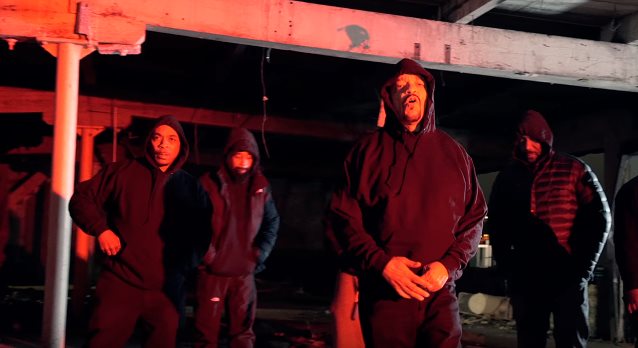 "Black Hoodie", the new video from BODY COUNT, the metal band fronted by hip-hop legend, actor and director Ice-T, can be seen below. The clip was directed by Treach Tribe.

Ice-T states: "This type of thing happens every day and nobody marches or it never makes the news. The video speaks for itself."

"Black Hoodie" is taken from BODY COUNT's new album, "Bloodlust", which will be released on March 31 via Century Media Records. The disc was recorded with producer Will Putney (MISS MAY I, UPON A BURNING BODY),who also helmed 2014's "Manslaughter". The new CD features guest appearances by Max Cavalera (SOULFLY, SEPULTURA),MEGADETH mainman Dave Mustaine and LAMB OF GOD frontman Randy Blythe. The effort also contains BODY COUNT's medley of the SLAYER songs "Postmortem" and "Raining Blood".

Ice-T recently told Revolver magazine about "Bloodlust": "Making records is a very interesting process. You work really hard on something and finish it and then you'll be, like, 'Yo, that sounds like somebody else's record.' Or, 'Hey, didn't we just make that record three days ago?'

"One time we did two songs in a row and afterwards I looked at them and said, 'That's the same riff in each song.' So we had to pick one. But in the end, we came up with some very aggressive and cool music."

He added: "I like to start with hot metal tracks that you can listen to without a word on them and go, 'Wow, that was just like fire!’ The music tells me what the song is about, and that's when the words start coming to me. Then it's up to me not to fuck it up."

As for the choice of album title, Ice-T said: "Bloodlust is part of the human makeup. Murder is about as normal as love. It's in our nature to want to get violent and kill, but we know there are consequences. That's why we like violent movies, video games and combat sports. It's in our DNA. It's what we are."

"Manslaughter" sold around 3,600 copies in the United States in its first week of release to land at position No. 102 on The Billboard 200 chart. The record arrived in stores on June 10, 2014 via Sumerian.

BODY COUNT's current lineup includes guitarist Juan Garcia (a.k.a. Juan Of The Dead; AGENT STEEL, EVILDEAD),who made his live debut with the group in November 2013 at the Fun Fun Fun Fest in Austin, Texas.