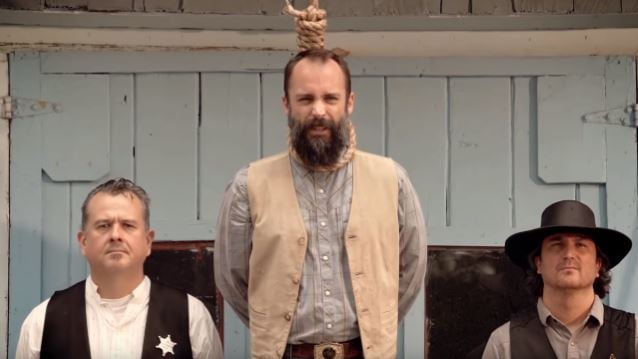 "A Quick Death In Texas", the new video from Maryland rockers CLUTCH, can be seen below. The clip was directed by David Brodsky of MyGoodEye, who has previously worked with PAPA ROACH and IN THIS MOMENT, among other bands.

"The video for 'A Quick Death In Texas' was a lot of fun to make," states CLUTCH frontman Neil Fallon.

"Dave Brodsky and his crew did a great job and considering that the whole shoot was done in a single day is astonishing.

"I won't lie, I had a blast playing cowboy for a day, even if it meant getting repeatedly killed, sometimes by desperados, sometimes by trusted bandmates.

"Originally, I was going to be drawn and quartered, but we didn't have the budget for four horses. So we opted for a traditional one-horse dragging. And Lucky, the painted roan, did a fine job of delivering justice."

"A Quick Death In Texas" is taken from CLUTCH's latest album, "Psychic Warfare", which debuted at No. 11 on The Billboard 200 chart after shifting 26,000 equivalent album units in the week ending October 8, 2015.

"Psychic Warfare" was released on October 2, 2015 via CLUTCH's own label Weathermaker Music. The CD consists of 12 new tracks.

"The title 'Psychic Warfare' is taken from the track 'X-Ray Visions'," stated Fallon. "It's a tale about an unnamed protagonist who is forced to seek refuge in a flop house motel. He is hiding from several nefarious psychic forces, the worst of which is his own sleep-deprived paranoia."

According to Fallon, the "X-Ray Visions" lyrical concept was influenced by Philip K. Dick, the science fiction author whose 1968 novel"Do Androids Dream of Electric Sheep?" was the basis for "Blade Runner". Neil said: "[Dick's] general philosophy and questions have always crept into my lyrics, because I share an interest in it. On [2013's] 'Earth Rocker', 'Crucial Velocity' was definitely a Philip K. Dick song for me. On this record, 'X-Ray Visions' certainly is."