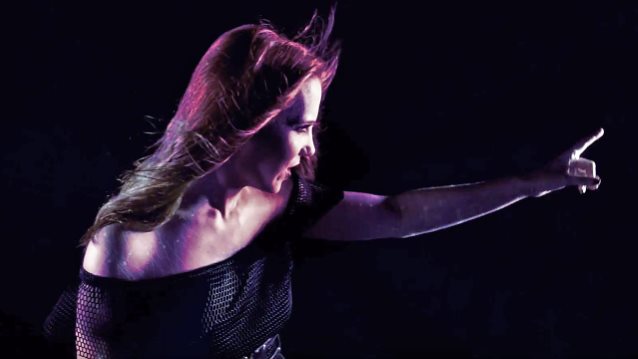 Video Premiere: EPICA's 'Beyond The Matrix'

"Beyond The Matrix", the new video from Dutch symphonic metallers EPICA, can be seen below. The clip was produced by Jens De Vos and his team at Panda Productions.

"Beyond The Matrix" is taken from EPICA's latest album, "The Holographic Principle", which was released on September 30 via Nuclear Blast.

Commented EPICA frontwoman Simone Simons: "The energy that lives within 'Beyond the Matrix' is extremely contagious. It will sweep you off your feet when the melodies enter your mind.

"The video embodies the spirit and liveliness of EPICA.

"Transcend together with us and shine past the sky"

EPICA guitarist Mark Jansen added: "'Beyond The Matrix' is one of my favorite tracks to play live from our new album, as it makes the crowd go wild, so I'm happy we are releasing a video of it.

"We have managed to catch the energy of the song and translate it into images (and words).

"The song is dealing about us humans, being caught in a matrix (an illusion) because of our excessive thinking. We have lost control over our lives and accept the illusion as 'the one reality.' But if we manage to free ourselves from those shackles and become masters of our thoughts again, we can make a huge step forward in collective consciousness and will be able to look beyond the borders of our matrix.

"Fasten your seatbelts and enjoy the ride!!!"

Simons recently told Metal-Rules.com about the lyrical themes covered on "The Holographic Principle": "It isn't a concept CD as the story is not in a chronological order of events from beginning to the end. Some songs deviate from the idea.

After finishing a successful North American tour last month, EPICA will kick off a massive European tour with POWERWOLF and BEYOND THE BLACK this week.