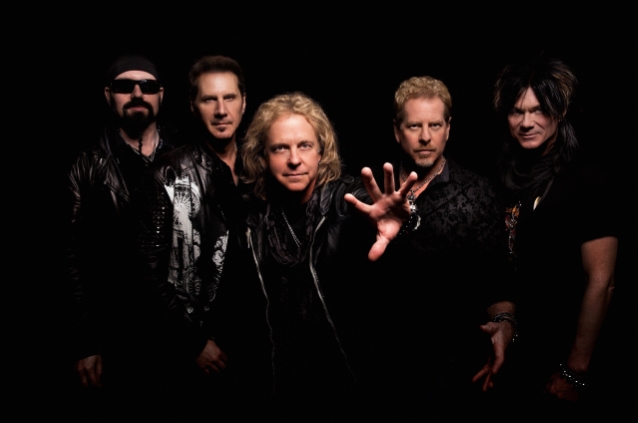 Veteran Bay Area hard rock group NIGHT RANGER has released the official music video for the song "Truth". The track is taken from the band's latest studio album, "Don't Let Up", which was released in March 2017 via Frontiers Music Srl.

NIGHT RANGER guitarist Brad Gillis added: "As typical for NIGHT RANGER, we have all the elements that made us popular in the first place, including twin-lead-vocal tradeoffs with Jack and Kelly [Keagy, drums/vocals] and dual guitar harmonies and solos with my new partner in crime, Keri Kelli. We've stacked the deck again with uptempo driving rock songs, midtempo tunes and a few acoustic ballad tracks."

As previously reported, NIGHT RANGER will celebrate the 35th anniversaries of its first two studio albums, "Dawn Patrol" and "Midnight Madness", by performing both records in full for the first time during an October 18 concert at the Genesee Theatre in Waukegan, Illinois.

"Dawn Patrol", released by MCA Records in November of 1982, included the Top 40 mainstream rock hit singles "Sing Me Away" and "Don't Tell Me You Love Me" and peaked at No. 38 on the Billboard 200 albums chart.

"Midnight Madness", the group's sophomore album (and first to be certified gold and platinum by the RIAA),was issued in October of 1983. The record — which peaked at No. 15 on the Billboard 200 — yielded three additional Top 40 mainstream rock hit singles in "Rumours In The Air", "When You Close Your Eyes" and "(You Can Still) Rock In America". It also included the group's best-known song, the iconic power ballad "Sister Christian", which spent 24 weeks on the Billboard Hot 100 singles chart in 1984, peaking at No. 5.

Three NIGHT RANGER members who performed on those albums — Blades, Gillis and Keagy — are still in the band today. The group's current lineup is rounded out by keyboardist Eric Levi and Kelli (ALICE COOPER, SLASH'S SNAKEPIT, RATT).