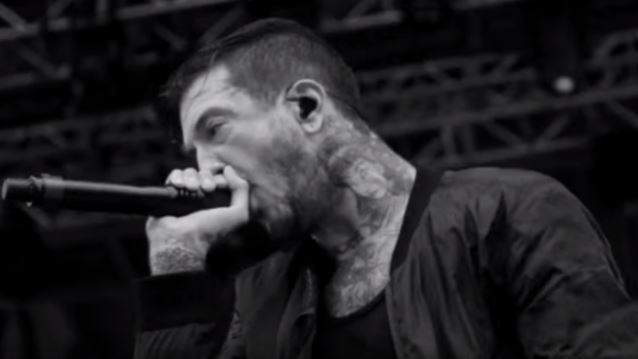 "Never Giving Up", the new video from the California-based rock quintet OF MICE & MEN, can be seen below.

The new songs — "Broken Generation", "Something To Hide", "Never Giving Up" and the acoustic version of "Feels Like Forever" — were recorded last fall with producer David Bendeth (PARAMORE, BRING ME THE HORIZON) in Southern California.

The two-CD set is a special reissue of the album "Restoring Force", which hit No. 4 on The Billboard 200 chart and No. 1 on both the Billboard Top Independent and Top Rock Albums charts.

OF MICE & MEN frontman Austin Carlile told The Pulse Of Radio that the band has come a long way from its very first concert. "Our first show we ever played, we had to play a full set, but we only had one song that anyone knew — we had a song on MySpace," he said. "We played a whole set and literally no one knew a word of any of the song, 'cause we had just written it. That was our first show, and that was in Bakersfield, California. So it's cool just to see where the band's gone, and it's really humbling to see where we are now, 'cause I know where we've been."