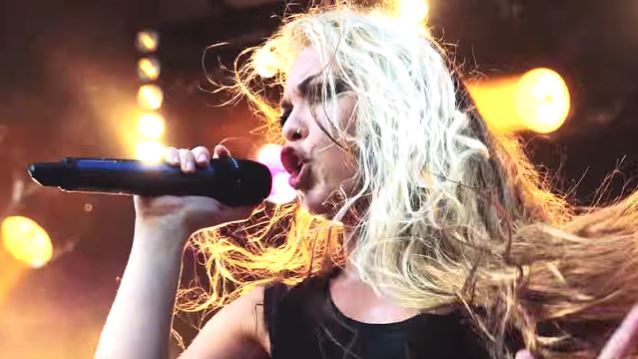 "Follow The Crossed Line", the new video from Montreal, Quebec, Canada-based melodic death metallers THE AGONIST, can be seen below. The clip was directed by THE AGONIST bassist Chris Kells and features professionally filmed footage of THE AGONIST's recent Heavy Montreal performance.

Guitarist Danny Marino comments, "Were thrilled to release this video for 'Follow The Crossed Line'. This song is one of the band's favorites and has become a staple of our live set.

"The video contrasts between us live and us playing in our rehearsal space in Montreal.

"It's always a challenge for Chris both directing and being in the video at the same time, but we're really happy how the video matches the intensity of the song."

"Follow The Crossed Line" is taken from THE AGONIST's latest album, "Eye Of Providence", which was released on February 24 in North America (one day earlier internationally) via Century Media. The band's first CD with singer Vicky Psarakis was recorded at The Grid studio in their hometown with producer Chris Donaldson (CRYPTOPSY). Vicky joined THE AGONIST as the replacement for Alissa White-Gluz, who left the band to focus on her new gig as the frontwoman of ARCH ENEMY.

In a recent interview with Decibel magazine, Danny Marino stated about the writing process for "Eye Of Providence" compared to those for the band's previous albums: "It was a whole new experience and the most enjoyable we've ever had. There was an air of full collaboration like never before. It was a good balance of group effort and individual composition and understanding that balance. While Vicky [and I] were the main composers, every member composed part of this album and this was the first album where lyrical content was also shared between Vicky, Simon [and I]."

Asked where he thinks THE AGONIST fits in today's metal scene, Danny said: "I don't really know exactly. I think it's cliché to say we can't be categorized, but I do think that is true of 'Prisoners' and 'Eye Of Providence'. I feel like we have come into our own sound, especially on 'Eye Of Providence'. I am influenced by artists like Devin Townsend and Mikael Åkerfeldt. Not to say that our music sounds like those bands, per se. But I am inspired by artists with the courage to take a listener to many different places in one album and make it work somehow. That's what we have been trying to do since our second album. I think with 'Eye Of Providence', we were able to find that balance."