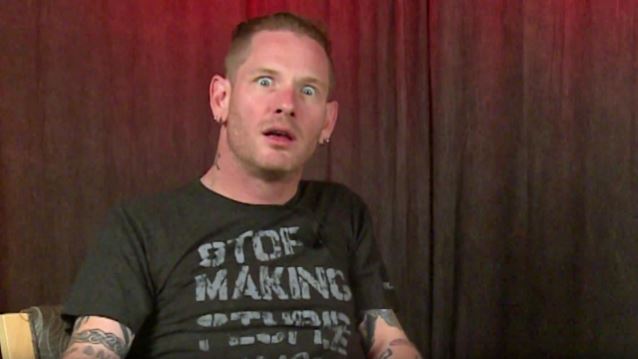 SLIPKNOT singer Corey Taylor says that he "would retire from touring" if the classic GUNS N' ROSES lineup played again, explaining that he "wouldn't want to go up against that."

Former GUNS N' ROSES guitarist Slash recently revealed that he and the band's lead singer, Axl Rose, had repaired their estranged relationship after nearly 20 years, immediately leading to a storm of speculation about a possible reunion of the classic GUNS lineup.

Speaking to the Las Vegas Review-Journal, Taylor stated about the prospect of a GUNS N' ROSES return: "I will believe it when I buy the ticket, let's put it that way. I mean, because nobody gets more excited about the thought of the 'Appetite For Destruction' lineup coming back together… That would be … I mean, there you go. I mean, dude, I would retire from touring, because I wouldn't want to go up against that. You know what I'm saying? And then I would follow them like I was a Deadhead. Like I would just go to every show. But that's only if it's the 'Appetite' lineup — or even if it's those guys with [drummer Matt] Sorum [instead of Steven Adler]… Because I know that Steven has some physical issues, but he can still play, man. I've seen him play. He can jam, dude. That dude knows how to pound."

He continued: "['Appetite For Destruction' is] top to bottom … yeah, it's one of those albums that you cannot listen to and not go, 'Holy shit!' Like you put it on, and you feel it, even if you're not into the music, you feel it. There's something so dirty and so raw and so amazing about that album. And the songs are amazing. You know, people like to talk about the production or the attitude … those fucking songs are ridiculous! It was the one album that all my metal friends, all my skater friends, all my punk friends, all my hard rock friends could agree on."

Taylor also recalled seeing GUNS N' ROSES open for AEROSMITH in 1988, calling it "probably one of the greatest concerts I ever saw in my life." He went on to say: "They were the … they were my ROLLING STONES. You know, they were my rock 'n' roll band. And they always will be, even as Axl tries to kill the name."

The closest anyone came to a GUNS reunion in recent memory was when the band was inducted into the Rock And Roll Hall Of Fame in 2012. Three original members of the band, including Slash, Adler and bassist Duff McKagan, showed up, but Axl and guitarist Izzy Stradlin were no-shows.