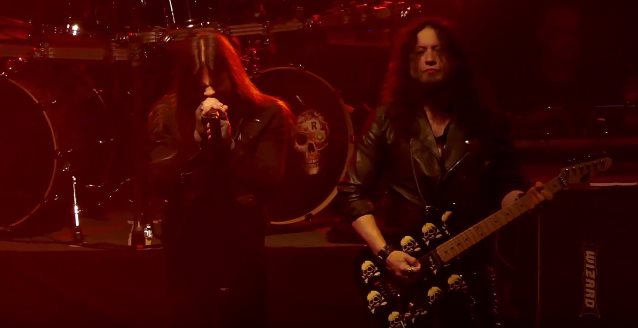 Fan-filmed video footage of QUEENSRŸCHE's December 7 performance at Rex Theater in Pittsburgh, Pennsylvania can be seen below.

QUEENSRŸCHE recently embarked on a month-long headlining tour of the United States. Support on the trek came from ARMORED SAINT and MIDNIGHT ETERNAL.

The band plans to enter the studio in January to write and record the follow-up to "Condition Hüman" for a late 2017 release.

In an interview with the The Aquarian Weekly, singer Todd La Torre stated about QUEENSRŸCHE's most recent tour: "Yeah. We've got a lot of new songs in the set. We've kept some of the staple songs the fans wanna hear, but we changed things up a lot to improve the production."

He added: "There's always gonna be those staple songs that the band will always play, but then we just listen to the fans and see what they wanna hear. Then we take the majority when we ask people and then also combine with what we wanna play and what's fun for us to do. We put a setlist together so that most everyone hears what they wanted. There's just so much material and there's only so much time to play. We do the best that we can."

La Torre told the "Rockin' Metal Revival" show that any songs that QUEENSRŸCHE plays on the current touring cycle that are not from the band's latest album are "from the first five or six records, just because… I think that the band overall just really feels that that is kind of more where their heart lies in the QUEENSRŸCHE catalog." He explained: "There are good songs and stuff on other records, but I think, collectively, when you talk to the bandmembers and you talk to the fans, the general consensus seems to be, like I say, from the EP up to 'Promised Land'. You know, somebody might like something off 'Tribe' or 'Hear In The Now Frontier', or whatever, but we really wanna be able to play what we wanna play, but also you try to think of the majority of the fans."

He continued: "There's always gonna be someone that isn't happy that you didn't play a particular song off a particular record, but you have to go with what is probably the biggest bang for the buck for the fans. And I think that we've put together a really great setlist."