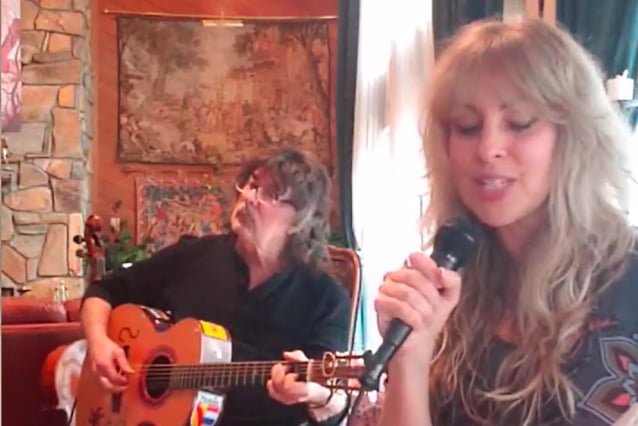 Legendary DEEP PURPLE and RAINBOW guitarist Ritchie Blackmore and his wife, vocalist/multi-instrumentalist Candice Night, have uploaded a video of them performing an acoustic version of the JOAN BAEZ classic "Diamonds & Rust" (later famously covered by JUDAS PRIEST). The clip, which was apparently filmed at Ritchie and Candice's home on Long Island, New York, near Port Jefferson, can be seen below.

In a message accompanying the video, Candice wrote: "Live from Minstrel Hall. This quarantine has inspired us to revisit an old favorite and rework it a bit. What else is there to do while inside? Diamonds and Rust becomes Vacuum and Dust. Thank you Mr Coverdale for inspiration! Stay safe, stay healthy, stay indoors and stay sane!"

Asked in a 2018 interview with Metal Rules about the secret to their enduring personal relationship and partnership in BLACKMORE'S NIGHT, Candice said: "Ritchie is an amazing enigma and can get inspiration from 'friction.' [Laughs] He can step on stage and not enjoy the people around him even though he had played with them for many years. After a while, egos got involved and everyone was traveling in different limos and only saw each other when they went on stage. Decades before, they would have all hung out and gone out to dinner then slept on each other's floor. That bond is what made it so magical in the beginning. Then success came, people get torn in different directions, and personal relationships started to deteriorate. It never got dealt with, so it just festered. He wrote some amazing things during those difficult times.

"When Ritchie and I are together, we found that we have a great form of communication, which I think is key," she continued. "If there is an issue or problem, we are going to hash it out. There are going to be times when we need time away from each together as well. There have been times on the road where we have been so angry at each other that we needed to get separate rooms so I could have a night by myself to chill out.

"When you are touring, traveling and performing with somebody, you are living and breathing them 24/7," Candice added. "We have respect and understanding for each other. I don't think he really had that with other bandmembers, but for us, it seems to work. I like the way we work together on a professional and creative basis where he will come up with the music, and he gives me free rein on the lyrics; once we have established a melody. The music he creates paints pictures in my head and has a storyline. I think you have to listen to what the music is trying to tell you. I translate what his music is saying. When we put the music and lyric together, we have the perfect marriage. We never step on each other's toes. As we have a mutual admiration for each other."

BLACKMORE'S NIGHT plays "Renaissance music," or "medieval music," with most of the tunes featuring lyrics conjured by Night and melodies crafted by Blackmore.

DEEP PURPLE drummer Ian Paice said in a 2017 interview that there was "no point" for the band to consider a reunion with Blackmore, explaining that he wouldn't be able to guarantee that every day with the notoriously moody guitarist would be fun.

Live from Minstrel Hall. This quarantine has inspired us to revisit an old favorite and rework it a bit. What else is there to do while inside? Diamonds and Rust becomes Vacuum and Dust. Thank you Mr Coverdale for inspiration! Stay safe, stay healthy, stay indoors and stay sane!