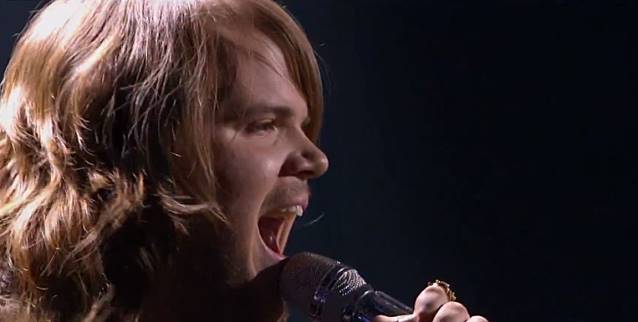 Asheville, North Carolina's "American Idol" star Caleb Johnson, who was the last of 13 contestants to perform on Wednesday night's (February 26) episode of the Fox TV talent show, delivered his own rendition of Californian blues-rockers RIVAL SONS' "Pressure & Time", the title track of the band's 2011 album. Check out video footage of his appearance below.

"You are so ready for the rock-star life," judge Jennifer Lopez said afterwards. "You have the goods to back it up."

Fellow judge Keith Urban agreed. "That was a great song," he said. "You've got to figure out how to put a twist on that."

RIVAL SONS are in the studio working on their fourth full-length album, the follow-up to 2012's "Head Down". The band entered LCS Studios at the beginning of January and will spend a full six weeks recording. The CD is once again being produced by Dave Cobb, who has worked on all previous RIVAL SONS releases.