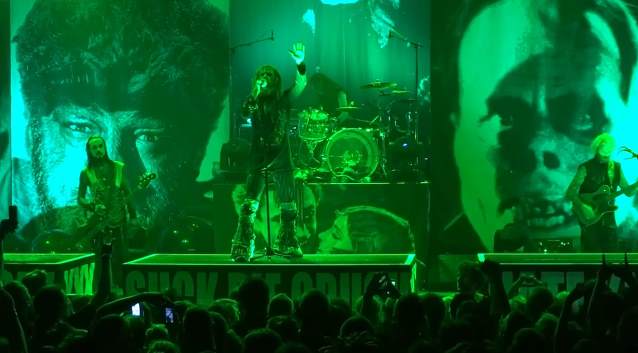 Fan-filmed video footage of ROB ZOMBIE performing a cover version of the METALLICA classic "Enter Sandman" on April 29 at the House Of Blues in North Myrtle Beach, South Carolina can be seen below.

According to The Pulse Of Radio, Rob Zombie not only has a live DVD, a book and a spring tour on the way, but he's already begun work on the follow-up to last year's album, "Venomous Rat Regeneration Vendor". Zombie and his band started putting together his sixth solo CD in January, and told The Pulse Of Radio he plans to resume the project in May. "I don't want years and years to go by between records, even though somehow it always seems to happen," he said. "And, you know, we're really excited because we really felt that for ourselves as a band, the last record really kind of got back to something that I was looking for, and we were just excited to take it to the next level. When you're feeling inspired, you kind of want to go for it, because sometimes you don't feel inspired."

Zombie has set May 20 as the release date for his first official concert DVD and Blu-ray, titled "The Zombie Horror Picture Show". Filmed at two shows last August in Texas, the 16-song set will include live versions of solo hits, WHITE ZOMBIE classics "Thunderkiss '65", "More Human Than Human" and "Supercharger Heaven", plus Zombie's recent cover of GRAND FUNK RAILROAD's "We're An American Band". A photo book by photographer Rob Fenn will be published as a companion piece to the home video release.

"Venomous Rat Regeneration Vendor" sold 34,000 copies in the United States in its first week of release to land at position No. 7 on The Billboard 200 chart. The record arrived in stores on April 23, 2013 via Zodiac Swan/T-Boy/Ume. The CD was produced by Bob Marlette, who has previously worked with everyone from BLACK SABBATH and ALICE COOPER to WILSON PHILLIPS and LYNYRD SKYNYRD. 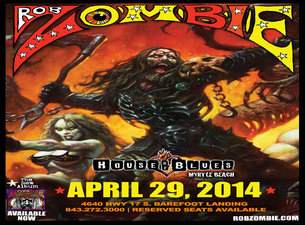