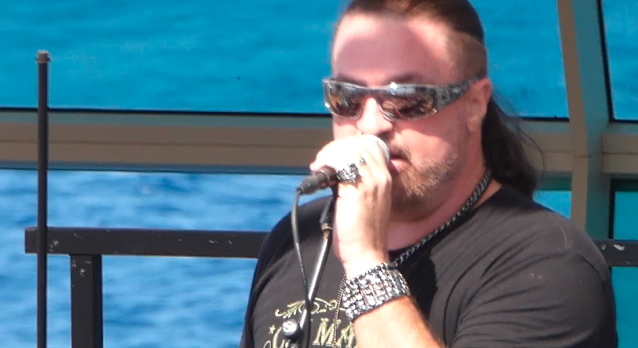 Joel Hoekstra (WHITESNAKE, TRANS-SIBERIAN ORCHESTRA) and Russell Allen (SYMPHONY X, TRANS-SIBERIAN ORCHESTRA) performed an acoustic set of rock classics — including those by WHITESNAKE, BAD COMPANY and LED ZEPPELIN — during this year's Monsters Of Rock cruise, which sailed earlier this month from Fort Lauderdale to Belize. They were accompanied by various musicians, including drummer Mike Vanderhule (Y&T) and bassists Greg Smith (TYKETTO) and Aaron Leigh (Y&T).

Fan-filmed video of the performance can be seen below (courtesy of YouTube user "WILL TRAVEL FOR GIGS"). Note: The video is jumpy because the camera broke.

Hoekstra joined WHITESNAKE in 2014 following the departure of Doug Aldrich.

The Chicago native's résumé includes a long stint in NIGHT RANGER, as well as a gig as the touring guitarist for TRANS-SIBERIAN ORCHESTRA.

Back in 2015, Hoekstra released the "Dying To Live" album from his side project JOEL HOEKSTRA'S 13.

Last November, Allen "slipped and fell" during rehearsals for the TRANS-SIBERIAN ORCHESTRA tour. As a result, he missed the "TSO East" portion of the 2019 holiday trek, "Christmas Eve And Other Stories".

Back in July 2017, Allen was involved in a road accident that resulted in the death of his ADRENALINE MOB and TRANS-SIBERIAN ORCHESTRA bandmate, bass player David Zablidowsky. Russell escaped with minor injuries and returned to the stage with TSO in November of that year.