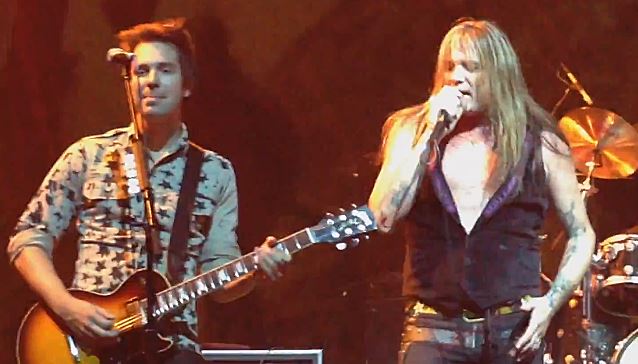 Former SKID ROW singer Sebastian Bach fell on stage during the opening song of his April 19 performance at Saban Theatre in Beverly Hills, California. Fan-filmed video footage of the incident can be seen below.

Tweeting the next day, Bach seemed to blame the bassist of his solo band, Kevin Chown, for causing the singer to slip and fall. He wrote: "Omg @Madonna ain't got nothin' on me haha #ShitHappens #BodyCheck by @kevinchown"

SKID ROW fired Solinger over the phone on April 6, a few hours before announcing ex-TNT vocalist Tony Harnell as his replacement.

Omg @Madonna ain't got nothin' on me haha #ShitHappens#BodyCheck by @kevinchownhttps://t.co/2qyvmB66du