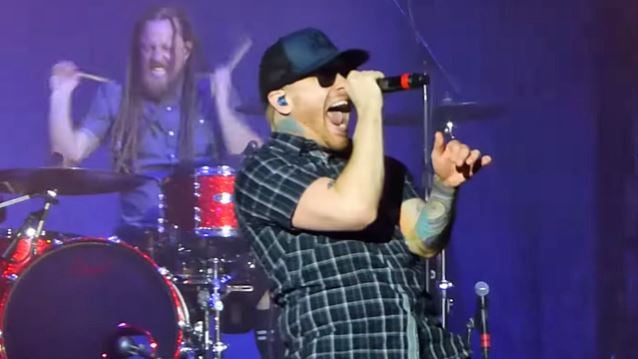 Fan-filmed video footage of SHINEDOWN performing two new songs, "Asking For It" and "Cut The Cord", during the band's July 11 concert in The Woodlands, Texas, can be seen below.

"Cut The Cord" serves as the first single from SHINEDOWN's upcoming new album. The group's fifth studio effort will come out this summer, although an exact release date and title are yet to be announced. SHINEDOWN singer Brent Smith told The Pulse Of Radio what we can expect from the record. "A lot of bands and a lot of artists take the initiative to say — if they're lucky enough to get to a fifth album — 'Yeah, it's such a different record' and all these things," he said. "And you listen to it and you go, 'That's cool, it sounds exactly the same as your last records.' That's really not the case with this. It's a devastating record. It's a heartbreaking record. It's a beautiful record, but it's ferocious."

Smith said in a statement about "Cut The Cord": "In your truest moment of weakness… When everyone and everything has betrayed you, and evil and hatred has wrapped itself around your mind, body and soul… this is the song that you play. This is the statement to the world that you will not give up, you will not give in, and you refuse to fail!!! Now is your time… to 'cut the cord.'"

SHINEDOWN has just embarked on its first major tour in more than two years, visiting theaters and other intimate venues across the country. NOTHING MORE is serving as support on the bulk of the headlining dates.