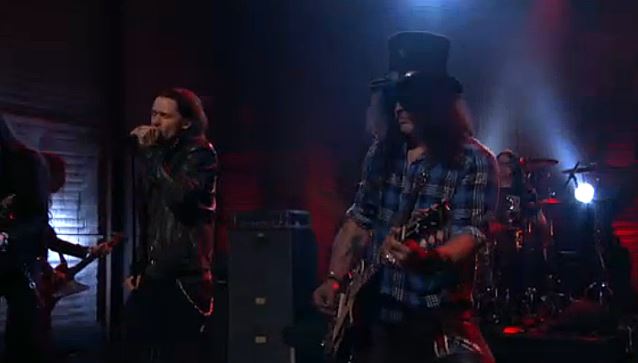 You can watch video footage of Slash's performance at TeamCoco.com (beginning at around 37-minute mark).

As previously reported, Slash was honored with the prestigious Les Paul Award during the 30th annual NAMM Technical Excellence & Creativity Awards on January 24 in Anaheim, California.

The NAMM Awards were created to honor people and companies across 30 categories for excellency in audio technology and production.

Slash is enjoying a vibrant solo career these days with SLASH FEATURING MYLES KENNEDY AND THE CONSPIRATORS. On September 16, 2014, the band released "World On Fire", which marks Slash's third straight album to debut in the Top 10. The title track hit No. 1 on rock radio.