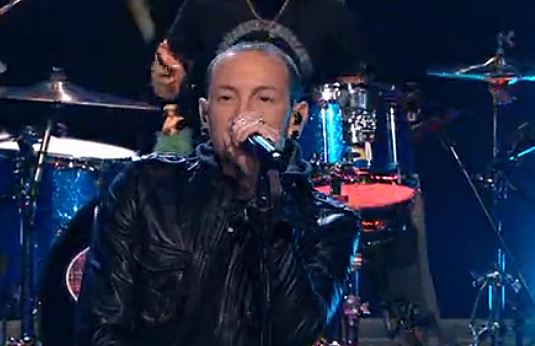 The new version of STONE TEMPLE PILOTS, with Chester Bennington on lead vocals, made its TV debut on Thursday night (October 3) with a performance of the song "Black Heart" on NBC's "The Tonight Show With Jay Leno". The band just completed its first tour with Bennington as its new singer and will release a new EP titled "High Rise" next Tuesday (October 8).

Bennington told The Pulse Of Radio that going on tour with STP for the first time was a more nerve-wracking experience than usual. "We're going out here and we know that we have a lot to prove," he said. "And there are a lot of people who don't understand what's going on, they don't know the intimate, working relationships that these guys have had throughout their careers, and how difficult it has been. And they also know me for what I do and it's kind of hard to see how the two might mix. So we know we want to go out, and we know what we expect of ourselves, and we want to go out and we want to prove ourselves and earn the respect of the people there."

Weiland and the band have sued each other, with Weiland claiming that the other members cannot use the STP name and the group alleging that Weiland damaged their careers.

Bennington is also currently working on material for the next LINKIN PARK album.