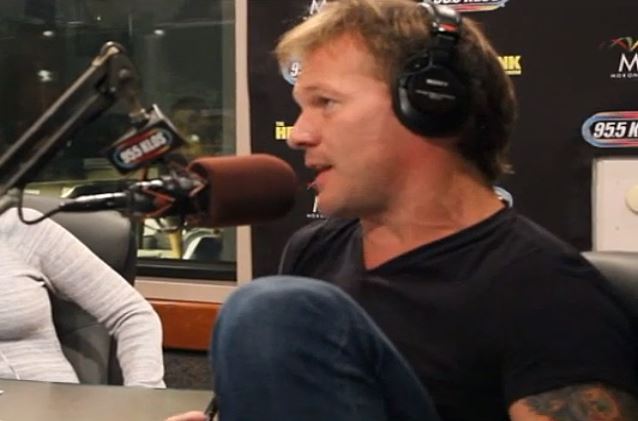 FOZZY singer and WWE wrestling superstar Chris Jericho took part in an interview this morning (Friday, October 4) on "The Heidi & Frank Show" on KLOS 95.5 FM radio station in Los Angeles, California. You can now watch video footage of his appearance below.

In a recent interview with The Austin Chronicle, Jericho stated about FOZZY's latest album, 2012's "Sin And Bones" and how it compares to 2010's "Chasing The Grail": "I think it's the evolution of where the band has gone since '05. I think 'All That Remains' was a good record. I think 'Grail' was leaps and bounds ahead because there was so much more touring we had done, being together as a band, knowing our strengths and weaknesses. That's why we ended up with 'Sin And Bones', because we knew exactly what we wanted to do. Very heavy riffs, very melodic vocals and choruses. We figured out: that's what we do. That's what we do best. That's something that makes us a little unique from other bands, and it's something that's taken us as far as it has.

"It's really cool, because I've read 15, 20 reviews, and reviews are great, and you can take or leave them, but the majority are saying that it's the best stuff we've ever done, that it's the first time they've listened to the band with an open mind because of what we talked about earlier. It's like, 'OK, we've heard a lot about 'All That Remains', but they'll go away. 'Chasing The Grail', people are saying it's the best album of the year, but why? I'm still not going to listen to it, this is bullshit.' Then 'Sin And Bones' came out and they say, 'OK, I'm finally going to give it a chance. Oh my gosh, what have I been waiting for all these years?'

"We've finally, after all these years, found exactly what it is we do that makes us better than anybody else, that makes us unique. We've also got a lot of diversity: We love METALLICA and IRON MAIDEN and OZZY, but we also love THE BEATLES and JOURNEY and PINK FLOYD, those bands from the '70s like STYX and FOREIGNER where everybody sang in the choruses, and we're implementing it.

"We've done things our own way our entire career, so fuck it, we're going to continue to it our own way. If people like it, great. If people don't, then just step aside and let the other people enjoy it. This is the real thing. This is going to continue to exist, so come aboard and join the party, instead of trying to be so stiff-lipped about it."