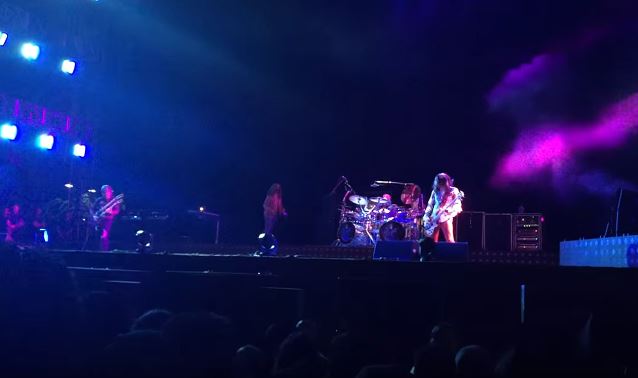 Video: TOOL Members Dress Up As LED ZEPPELIN To Cover 'No Quarter'

TOOL's cover of "No Quarter" was included on the band's "Salival" limited-edition box set, which was released in 2000. The cover was originally recorded for the soundtrack of "Private Parts", but TOOL subsequently decided against allowing it to be used.

According to The Pulse Of Radio, Keenan took to Twitter on Wednesday (October 28) to clarify comments he made during an interview in which he seemed to denounce TOOL's fans as "insufferable" and "way too serious." Keenan wrote, "Our core fan base aren't fanatics. They're music lovers & artists & good people. It's the fanatics that are insufferable." He also said it was untrue that he wants nothing to do with TOOL or its fans, posting the word "context" to imply that his words were misconstrued or misinterpreted.

Also responding to fan speculation that he had no desire to work with TOOL anymore after he said in the interview with the Phoenix New Times that he had to be "conned" into playing the Monster Mash Music Fest show with them this weekend, Keenan posted a photo of him and TOOL drummer Danny Carey in a rehearsal studio with the caption, "[Carey] and I TOTALLY hating on each other. #donttaketheclickbait #context."

Keenan was asked in the interview if fans miss the sense of humor in TOOL's music, to which he replied, "It's there, but people miss it because they're so focused on the other bullshit. It's lost. Insufferable people... It's just ridiculous, retards. I'm sorry. Can't help them. Way too serious."

The writer of the Phoenix New Times article, David Accomazzo, noted in his piece that any time Keenan was asked about TOOL, "his answers quickly become curt" and a "hint of exasperation creeps into his voice."