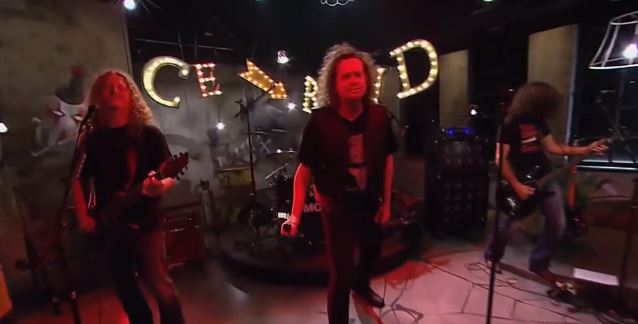 Video footage of VOIVOD's September 2014 performance on the Musique Plus program "Ce Show" in Montréal, Québec, Canada can be seen below.

VOIVOD and NAPALM DEATH will join forces for a North American tour, aptly dubbed "Through Space And Grind", in January/February.

VOIVOD this past summer tapped Dominic "Rocky" Laroche to play bass for the band following the departure of Jean-Yves Thériault (a.k.a. Blacky).

Laroche, who previously performed with blues musician Steve Hill, made his live debut with VOIVOD on July 12 at Festival Jonquière En Musique in the group's former hometown of Jonquière, Quebec, Canada.

VOIVOD on July 11 released a statement claiming that Blacky "decided to leave the band for his own personal reasons."