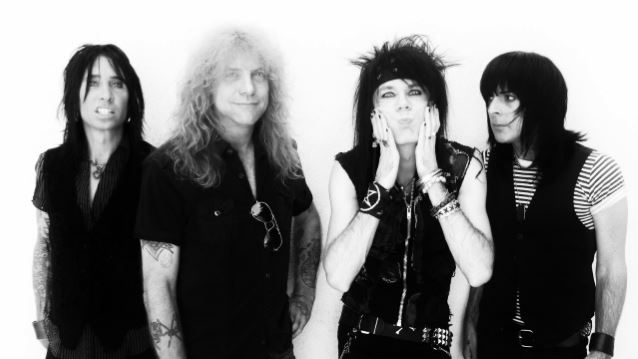 ADLER, the band led by former GUNS N' ROSES drummer Steven Adler, returned to the studio two weeks ago to record its first new material since the release of ADLER's debut album, "Back From The Dead", which came out in November 2012 via New Ocean Media. Helming the sessions once again is producer Jeff Pilson (FOREIGNER, DOKKEN),who told "The Double Stop" podcast earlier this month, "Steven started recording today [at my Southern California studio]; we recorded the first tune today. I don't know if we're gonna do a whole record. I think we're gonna just do a couple of songs, because it's kind of, like, why bother doing a whole record these days? But his juices are flowing, so we started in on that today, and that's gonna be great."

Steven told Argentinean rock journalist Lucas H. Gordon at the end of October that he was nearly ten months sober and was enrolled in "a nice program" to "take care" of his "problems with alcohol." He added: "I'm looking forward to going out and playing again… And it's just been very exciting. Having a new life is exciting."

Steven Adler's autobiography, "My Appetite for Destruction: Sex, and Drugs, and Guns N' Roses", came out in July 2010. In the book, Adler told all, fearlessly addressing his struggles with heroin and crack addiction; his financial ruin after being kicked out of GN'R; his shattered marriage; and the severe health problems that nearly claimed his life on several occasions.

Back in the studio this week with this crazy character:) #stevenadler#adler#newmusichttp://t.co/ZSWJhb4PmU