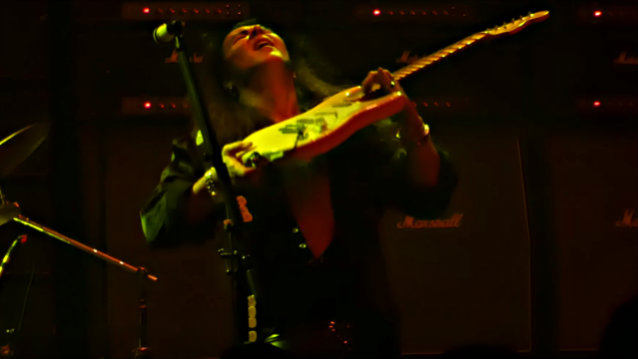 Fan-filmed video footage of Yngwie Malmsteen's May 11 performance at Newton Theatre in Newton, New Jersey can be seen below.

Malmsteen's current trek marks his first run of dates in the States since 2016 when he took part in the "Generation Axe" tour alongside Steve Vai, Zakk Wylde, Nuno Bettencourt and Tosin Abasi, playing to more than 70,000 people over 27 shows.

Yngwie's latest album, "World On Fire", came out last June via King Records. He told Seymour Duncan about the CD: "I spent two years [working] on it, touring, recording, touring, recording. And that's much, much better, actually, in a way. Back in the day I would write the songs then rehearse them with some musicians, then go and do a backing track and we'd record it, mix it, learn the songs to go play them on tour, then do it all again. That way isn't necessarily conducive to making the best music, y'know what I mean? So in a very, very backhanded way, this weird twist of fate in the music industry has actually made it a more inspiring environment, for me at least. I can write anytime and record anytime. My recording studio is always open, 24 hours. I can just record when I want and it's a beautiful thing."

Regarding what keeps him inspired to regularly release studio albums over the last thirty years, Malmsteen told Heavy Metal Bands Info in a 2015 interview: "It's the same approach I have when I am in the studio. I go into the studio and pick up the guitar or play the drums or whatever. I just do something and something comes out that inspires me. Then I carry on with it. I wanna have it happen like an inspired thing. Then I just put it down and listen to it in the car or wherever and I think, 'Oh, that sounds great.' I mean, I play it back a week later or so and I don't even remember doing it. Then I go, like, 'Wow, that’s great,' or, 'Wow, that's shit.' This is important to me, because at that stage I am listening more like a listener. Then I take that further and make it into a more complete thing. I found that this is the best way for me. That makes it exciting and inspiring. That's why I'm still doing it."