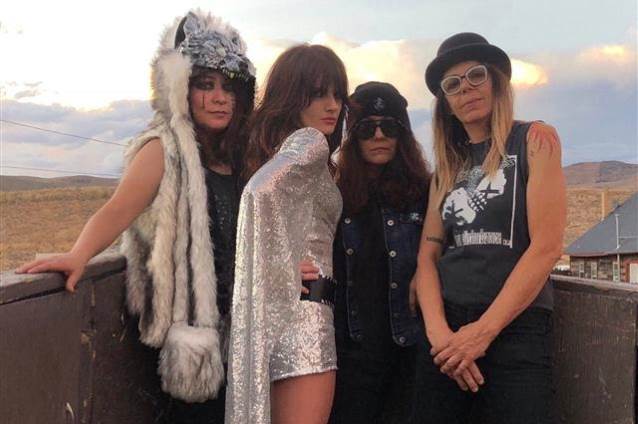 Viking metallers SAPPHIC MUSK will tour Eastern and Western Europe starting on September 7 in Kraków, Poland. This band of badass women will perform tracks from their current recordings, including "Lady Of The Twilight" (released in 2017),featuring the highly popular single "Kittenz" (produced by Bob Marlette and Lisa Pimentel). Their songwriting influences range from BLACK SABBATH to Patti Smith and incorporate a strong sense of humor and Viking mythology.

SAPPHIC MUSK is a dynamic all-female rock band who formed in Los Angeles in 2014. Frontwoman Sara T. Russell considers herself as much a rock and metal musician as performer and comedian when she gets on stage in full Viking regalia including a horned headpiece, faux animal skins and feathers. Sara creates stage props, writes the lyrics and melodies and also produces the band's artwork. Formerly she played guitar in THE SHARP EASE and fronted SILVER AND GOLD. Guitarist Mia Ferraro has played with SPOON and HOLE, and she was also a significant member of the two very well-loved and influential (but now defunct) bands BOBSLED and TADPOLE. Bassist Christina "Ylva" Ownby has played with SAME DAY SERVICE and PEG LEG LOVE and drummer Freddie McCullough previously played with THE SLIVERS and KITTENHEAD.

Ferraro explains: "Our music runs the gamut from metal to punk to power-pop (with a rich emphasis on comedy-rock) and beyond. More than anything, we are a fun and energetic all-female rock 'n' roll band." Sara adds: "We give 110 percent at live shows. We want to keep the art of performance alive." The band has shared the stage with like-minded artists, including PANSY DIVISION, KRAMMPSTEIN, NO SMALL CHILDREN and BLACK SABBITCH.

The LA Weekly included SAPPHIC MUSK in its "Best of L.A." issue this year in the category of "Best Viking Metal Band", noting: "In terms of pure power and sterling theatricality, this quartet of hard-rockin' wimmin — led by sonic sorcerer Sara T. Russell — present heavy metal in the way that…is at once imaginative, joyous and hard. And when Russell storms the stage, puts on her crown of antlers, girds her loins in a skintight black catsuit and spreads her massive golden wings wide, you know that she's a star, she's a star, she's a star."