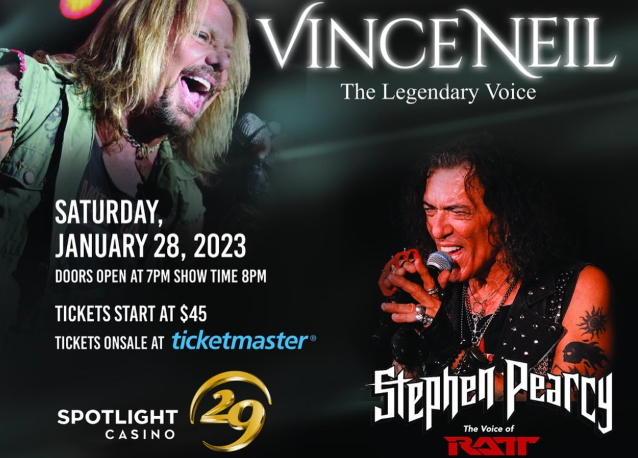 MÖTLEY CRÜE singer Vince Neil and RATT frontman Stephen Pearcy will join forces for a special concert on Saturday, January 28, 2023 at the Spotlight Showroom at the Spotlight 29 Casino in Coachella, California. Neil and Pearcy will appear with their respective solo bands and will perform classic songs from their legendary catalogs.

A few years ago, before CRÜE's 2019 reunion, Neil acknowledged to SiriusXM's "Trunk Nation With Eddie Trunk" that he was the only member of MÖTLEY CRÜE who was waving the flag for the band's music by performing CRÜE songs as a solo artist.

Pearcy will release a new collection of music, "Legacy", in early 2023 via Golden Robot Records. According to Stephen, the set will include never-before-heard RATT songs, solo tracks, re-recordings and new versions of previously released tunes.