Rock fans from around the globe are invited to re­live the filth of the Sunset Strip for one night only at SiriusXM's Hair Nation Festival. The current music lineup is as follows:

The festival will be hosted by Eddie Trunk.

Vince Neil says: "I can't wait to perform back in Southern California where it all started for me.This is a big kick-ass event and I'm gonna pull out all the stops on this one. What a great lineup, in a great venue… See you in September. Be there!"

Eddie Trunk adds: "I'm truly honored to host the first-ever Hair Nation show. As a lifelong fan, friend and supporter of so many of these bands on radio and TV, it's great to see them have their own event to celebrate their decades of great music."

General admission and VIP tickets for SiriusXM's Hair Nation Festival go on sale Friday, April 22 at 10:00 a.m. PT through HairNationFest.com and start at just $15 (plus fees).

SiriusXM listeners will be able to purchase tickets before they go on sale to the general public via a SiriusXM ticket presale from Wednesday, April 20 at 10 a.m. PT to Thursday, April 21 at 10:00 p.m. PT.

A limited number of exclusive e xperiences and VIP opportunities are available for purchase, including access to one or more VIP Lounges at the festival, premier seating and VIP restrooms, with some of the packages including exclusive meet-and-greet and photo opportunities with select bands, front row tickets, and more.

Live Nation, President Booking, Los Angeles, Rich Best says: "We're excited to be able to bring some of the defining rock artists of the '80s and '90s back to the outdoor amphitheatre setting of Irvine Meadows for the second year in a row."

John Reese of SGE adds: "Rock fans traveled from around the country and around the world for last year's festival, so it was clear that there was a demand for the return of the music of Hair Nation. These bands helped define an era when rock and roll was larger than life, and every show was a party. Bringing so many of these bands together at one festival for as low as $15 is a great value for fans."

Irvine Meadows Amphitheatre is located 8808 Irvine Center Drive in Irvine, Caifornia and is less than two hours from Los Angeles, San Diego, Riverside and San Bernardino Counties. It's also conveniently located a short drive from John Wayne Airport in Orange County, California. For those traveling to the Southern California area to attend SiriusXM's Hair Nation, there are a wide variety of lodging options in the Irvine area. 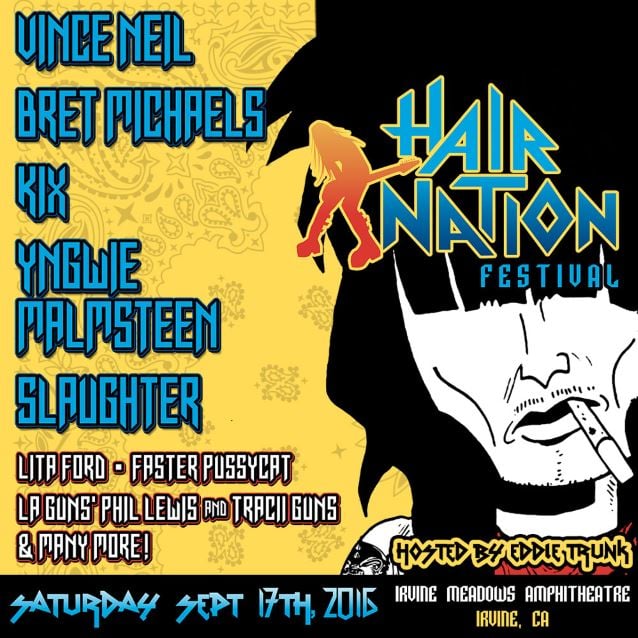