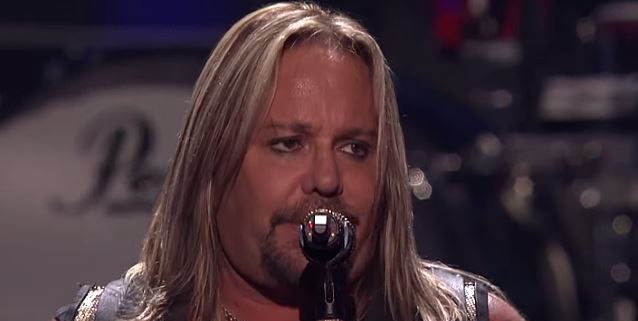 VINCE NEIL On His Post-MÖTLEY CRÜE Plans: 'My Plate Is Full'

In a a brand new interview with New York City Monthly, MÖTLEY CRÜE singer Vince Neil was asked what his plans are following the completion of the band's "The Final Tour". He responded: "We spent so much time with MÖTLEY CRÜE, it's hard to focus on other stuff. I've had the same solo band for nine, ten years. When MÖTLEY doesn't tour, we always play. I put out some new music with my solo band. I have that football team in Las Vegas [Las Vegas Outlaws], Arena Football; that's going to be a lot of fun in the future. Also a restaurant [Vince Neil's Tatuado Restaurant & Cantina], so my plate is full."

Vince also talked about what he hopes MÖTLEY CRÜE's legacy will be in rock and heavy metal music. He said: "I think the legacy is actually seeing the show and thinking these guys have been doing this for 35 years and we've never really faltered in giving the fans a great stage show. We've always been about the entertainment factor, which a lot of bands have forgotten about."

"The Final Tour", which kicked off last year, will end New Year's Eve at the Staples Center in Los Angeles after one more round of North American gigs.

Neil's setlist for his solo shows includes CRÜE hits "Dr. Feelgood", "Without You" and "Girls, Girls, Girls". "We kind of have to," he said in a 2014 interview. "I'd be disappointed as a fan if I went and saw me and I didn't play some of the hits…. Every song you're going to know. It's rock 'n' roll."