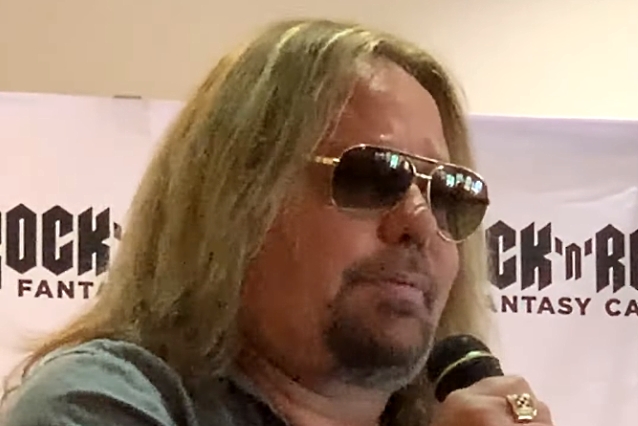 VINCE NEIL On His Relationship With MÖTLEY CRÜE Bandmates: 'We Still Keep In Touch'

MÖTLEY CRÜE singer Vince Neil says that he doesn't really talk to his bandmates now that the band is no longer an actively touring entity. "We text a lot," Vince said during a question-and-answer session at last month's Rock 'N' Roll Fantasy Camp in Las Vegas. "Me and Nikki [Sixx, bass] go back and forth."

Asked by interviewer Miles Schuman what the members of MÖTLEY CRÜE text about, Vince said: "Not much. Just like, 'Hey, bud. What's happening?' That's kind of it. I don't really talk with Mick [Mars, guitar] much. But the other guys, yeah, we still keep in touch."

According to Neil, Mars has not really changed much in the four decades since MÖTLEY CRÜE's inception.

"It's funny," Vince said. "I have a home not too far from him, outside of Nashville, and I've never seen him. Mick is Mick. Like in ['The Dirt'] movie, [he] just keeps to himself, puts himself in his basement and plays guitar. That's Mick."

This past spring, MÖTLEY CRÜE experienced a bump on multiple platforms, including downloads, streams and book sales, following the release of the band's biopic "The Dirt" via Netflix.